When the green border with Germany was closed – May 2020. Image: keystone

The  German federal government has tightened border controls and entry rules in order to curb the cross-border spread of the corona virus. For a total of almost 30 countries with particularly high numbers of infections or particularly dangerous virus variants, a test before entry has been mandatory since Sunday.

To this Hochrisikogebieten include the neighboring country of the Czech Republic, the holiday countries Portugal, Spain and Egypt as well as the USA. According to the Federal Ministry of the Interior, the tests are systematically checked at the airports and seaports. In the border areas to neighboring EU countries and Switzerland, travelers are randomly checked – this is called a veil search.

At the German-Czech border, long queues formed in some cases because of the new mandatory testing on Sunday.

The  German police reported in the afternoon about 500 people at the crossing in the Bavarian Schirnding (district of Wunsiedel), where a test station was set up.

The  deputy mayor of the neighboring Czech municipality of Cheb, Jiri Cerny, told the German Press Agency that the waiting time would be two to three hours at temperatures below zero.

The  long queue is also unfavorable for hygienic reasons.

When asked whether cross-border commuters pose a particular risk, he only said: “It makes little sense today to ask whether he or she brought the virus.” It is estimated that there are between 35,000 and 60,000 Czechs who work in Germany and regularly commute across the border.

Veil search on the border with Switzerland

For the veil manhunt in the border areas to the EU neighboring countries and Switzerland, the federal police initially deploy their staff there, which can be reinforced at any time, as spokesman for the Federal Ministry of the Interior of the dpa said. In addition to the federal police, the police in the federal states would also carry out controls. “

The  federal police have been asked to make extensive use of the control powers granted by the coronavirus entry regulation, especially in the virus variant and high-incidence areas,” said the spokesman.

At the largest German airport in Frankfurt am Main, the tests are checked directly on the aircraft before the actual border control, as the federal police announced. On Sunday, 17 flights from five countries should be affected.

With the tightening of the entry rules, cross-border travel in Europe is becoming even more unattractive – but this is also politically desirable. So far, the federal government had differentiated between areas with particularly contagious virus variants and “normal” risk areas when entering the country. Since Sunday at midnight there are three categories with different test and quarantine rules:

Travelers from “normal” risk areas must be tested for Corona no later than 48 hours after entering Germany.

The y also have to be in quarantine for ten days, but can be freed from it prematurely by a second negative test from day five.

The  difference between the high-incidence and virus variant areas is that a test is compulsory no more than 48 hours before entry. In addition, there are fewer exceptions to quarantine for the areas with increased risk. But that is regulated by the individual federal states. (sda / dpa)

China 1 year after the coronavirus outbreak

Anyone who has to violate the mask requirement in Bali … well, best see for yourself

New Corona measures – Sommaruga: “Important for the population to know...

Why Samsung’s new top mobile phone still has to save first... 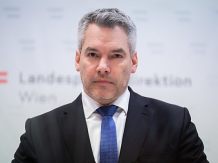 Successful landing on Mars – “The rover has found exactly the...