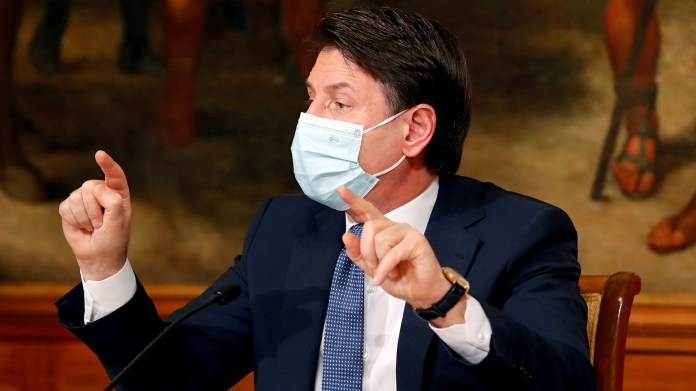 In the middle of the corona pandemic, Prime Minister Conte is suddenly without a majority.  The  independent lawyer is not thinking of resigning. Now he has to face his first vote of confidence.

The  cornerstones of political power in Italy are not far from each other. It is only a few steps from the Prime Minister’s Palazzo Chigi to the Chamber of Deputies, and the Senate is also within walking distance. So Giuseppe Conte does not have far to go to find out how great the distance really is between him and the representatives of the people.

The  political scientist Vincenzo Emanuele from the Roman university LUISS believes that the non-party lawyer is looking for a permanent majority. Conte is working on not only getting the votes of the so-called responsible people, but also wants to form a real political group that can support him in the future as a third pillar in the alliance with the Social Democrats and the Five Stars. So he would be politically autonomous.

Dispute over the recovery fund of the EU

For days, the Conte team has been on the hunt for new votes.

The  first MPs have already come out. Also from the small party Italia Viva, whose boss Matteo Renzi let the government alliance so rudely burst. After the big bang, the ex-prime minister is still present in the media. “We say: let’s change the school, the health system, the organization of transport, the infrastructure,” said the Florentine.

For weeks, Renzi has been criticizing that the more than 200 billion euros from the EU’s Recovery Fund are not investing enough in the future and that too much is going into bonuses.

The  Senator from Florence is particularly upset that 36 billion euros from the European rescue fund ESM for the health sector are not being called up.

The  larger government party, the Five Star Movement, is against it, fearing that Brussels will have too much of a say. Now she is mad at Renzi for breaking the government right now, in the middle of the corona pandemic.

The  co-ruling Social Democrats also have no understanding of Renzi’s maneuver. At the weekend, her boss Nicola Zingaretti emphasized: “For me, opening up a crisis in the dark is contrary to the will to improve government measures and address people’s problems.”

With the fall to 2.4 percent in election polls, the Italians of the Renzis party have already missed a lesson, over 70 percent assume purely personal interests.

The  opposition parties around Lega boss Matteo Salvini are ready for new elections, but Vincenzo Emanuele does not believe that it will come to that: “No MP and no senator wants to go home like no turkey wants Thanksgiving.”

In a new election, significantly fewer MPs would come to parliament as the number of seats has been reduced since the last election in 2018. Should Conte not get a majority in parliament, it would be Sergio Mattarella’s turn. “At that point he passes the ball on to the president, who has the task of finding another prime minister who then has to find a new majority,” said Emanuele.

For example, an expert government that partly consists of independent experts is conceivable.

The  first names are already circulating. But today Conte will first fight for his office.

The  countdown is running.

That’s why “Ex on the Beach” -Arman and Maddi’s love failed!

“Bauer sucht Frau” – Finale: chaos of love in the countryside

“Corona vaccination world champion” Israel: How does it manage the rapid...