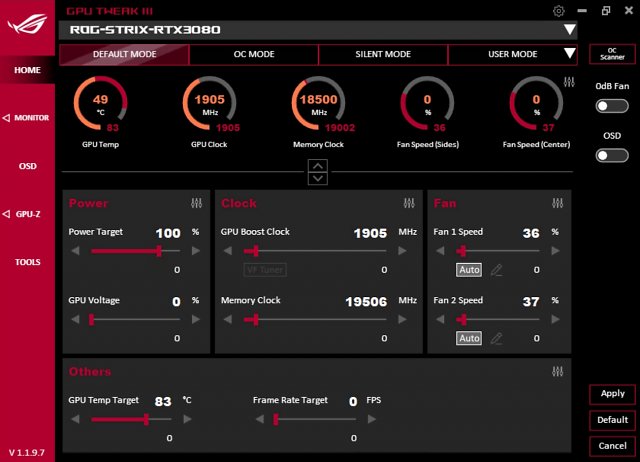 January 19, 2021 at 1:21 pm
of Maurice Riebling –
With GPU Tweak III, manufacturer Asus has released a new tool for overclocking and undervolting for GPUs from AMD and Nvidia, initially as an open beta. A lot has changed compared to GPU Tweak II. In particular, the user interface and on-screen monitoring have been heavily revised.

Asus is currently working hard on a new overclocking tool for graphics cards, which is now available for the first time as an open beta in the form of GPU Tweak III. Up to now, GPU Tweak II was the measure of all things in the software category of the manufacturer, which is now being replaced by the new iteration.

The  user interface in particular has been heavily revised. In addition, there are some new features and, of course, optimizations to the software itself.

As Asus reports in the changelog, different elements from the “Simple” and “Advanced” modes from GPU Tweak II are combined in the home screen of GPU Tweak III.

The re is either the tedious fiddling around with clock rates and voltages, among other things, or, alternatively, the immediate adjustment via one-click optimization. Asus advertises here with the modes “Default”, “OC”, “Silent” and “User Mode”. Owners of a current Nvidia graphics card from the Turing generation can also use the OC scanner.

Various basic metrics for the graphics cards used are also displayed directly in the tool’s home screen, with which GPU temperature, clock rate, power consumption and fan speeds can be read out. If this information is not enough for you, you can get more information about the directly integrated GPU-Z software and also test the adjustment made via the also integrated Furmark stress test in the adapted ROG Edition.

A detailed on-screen display (OSD) is available for the ultimate monitoring in applications, which has been significantly expanded compared to GPU Tweak II. Depending on which metrics users want to keep an eye on, the OSD can be more or less extensive.

Other useful features of GPU Tweak III meanwhile include the Armory Crate, which enables the lighting of hardware with Aura Sync support to be adjusted, and the streaming tool Gamecaster. Both AMD and Nvidia graphics cards are supported. In the first case, support applies from the AMD Radeon 7000 series (Southern Island). Regarding Nvidia, GPU Tweak III supports all graphics chips from the 600 series (Kepler).

To download GPU Tweak III (Open Beta) v. 1.2.1.1 via the official website of Asus can be found here.

December update: Our virus scanner for Windows 10 test reveals which antivirus programs are the best in 2021.

With the latest INF update, Intel is releasing another version of the chipset drivers for current Intel mainboard chipsets.

The se install the appropriate chipset drivers on Windows systems with an NT core.

The  Chipset Software Installation Utility can be downloaded from us for various chipsets and operating systems.

Download CPU-Z in the current version 1.94 for Windows in 32 or 64 bit as portable or setup version.

PCGH Plus: A considerable number of graphics cards from AMD have reached the PCGH test laboratory. We take a look at the custom designs and give you an overview.

Whole family dies of coronavirus within a few days Rivals in the same boat: Draghi must force parties to cooperate