The  year 2020 was stressful for many people, for a family from Lübben in the Spreewald it was hell. “When Paul’s mother called me one day before New Year’s Eve and told me about her fate, I could hardly believe it,” says Stefanie Doss from the German Bone Marrow Donor Center (DKMS).

The  non-profit organization registers stem cell donors in order to save people with blood cancer and similar life-threatening diseases through a stem cell transplant. Paul’s mother, who spends day and night with her 14-year-old son at the Charité in Berlin, also hopes for a savior, i.e. suitable donor.

“Paul’s illness hit the family when they had just recovered from a terrible stroke of fate,” says Stefanie Doss: “In the summer, Gregor, the eldest son, died suddenly. He lived with his girlfriend in Potsdam, went to bed one evening as always and didn’t wake up the next morning. ”

It later emerged that Gregor had a serious heart defect that had never been discovered.

The y had loved and adored their big brother. Everyone missed him. But life had to go on …

Paul’s mother, who works in nursing herself, was initially not worried when the 14-year-old suddenly developed a cough and a slight fever at the beginning of December last year. When the medication prescribed by the doctor didn’t work at all and the fever rose to 40 degrees, she took him to the emergency room at the Lübben hospital. “When I saw Paul’s eyes, which were all yellow, I knew it wasn’t normal flu,” says the mother. Since the blood and liver values ​​were miserable, the boy was taken to the Thiem Clinic in Cottbus by ambulance.

Only a stem cell transplant can save Paul

After numerous examinations, the terrible diagnosis was made: Paul suffers from hemophagocytic lymphohistiocytosis (HLH), a very rare and very difficult disease of the immune system that can only be cured with a stem cell transplant. Since then the boy has been fighting for his life. “

The  situation is very serious right now,” says Stefanie Doss: “Paul was transferred to the Charité and initially put into an artificial coma. Now he’s awake again, but had to be brought to the intensive care unit two days ago. We all hope so much that we can still find a suitable donor. “

For this reason, Paul’s parents, together with the DKMS, started an appeal with the request that as many people as possible register as stem cell donors. Giving up is not an option, it says: “That is why we ask in the name of our whole family from the bottom of our hearts: Register and give Paul and other affected people hope for a second life. Because only those who are registered can be found as a suitable stem cell donor. ”

It would actually be very simple, says Stefanie Doss: You can save lives and do not even have to leave the house – which is not unimportant for many in Corona times: “Everyone can register at the link www.dkms.de/pauli let who is healthy and between 17 and 55 years old ”. With just a few clicks you can request the registration documents and have them sent to your home.

The  set contains a declaration of consent and three cotton swabs, with which you have to rub the inside of the cheek for a minute. That doesn’t hurt, and afterwards you can simply put the chopsticks in the envelope and throw them in the mailbox – without paying anything.

It is only important that the cotton swabs are returned promptly after the cheek swab. Because only when the tissue characteristics have been determined in the laboratory, the data is recorded in the Central Bone Marrow Donor Register and is available worldwide.

But although the procedure is so simple, only about 60 percent of the requested sets come back, says Stefanie Doss. In addition, the number of registrations in the past year fell by almost a third compared to 2019. At DKMS, this is mainly attributed to the fact that the large typing campaigns, which are usually carried out in the vicinity of particularly affected patients, could not take place due to Corona.

“In the home region, the probability of finding a donor is particularly high,” says Stefanie Doss: “Sometimes 1,500 to 2,000 people came to such campaigns to register – now we have to rely on reaching as many potential donors as possible online In Paul’s case, for example, his sports club TSG 65 Lübben called on all members to help. “Our Paul, a happy 14-year-old boy from our B-Juniors, is seriously ill and urgently needs a stem cell donor,” you can read there.

The  fact that DKMS has only 218,800 registered stem cell donors in Berlin and 151,200 in Brandenburg is certainly also due to the fact that the organization has not been active here for that long. You can also register as a donor elsewhere – for example with the German Red Cross.

Required cells are taken from the donor blood

And apparently some people shy away from it because they believe that the cells must always be taken from the donor’s bone marrow. “But that is only the case for around ten to 20 percent,” says Stefanie Doss: “Otherwise, they are obtained from the donor’s blood, for which only two venous accesses have to be made: blood comes out of one and the stem cells are taken for the recipient.

The  blood then flows back into the donor’s body via the other access. ”

The  better the match between donor and recipient cells, the higher the chance of success of the transplant. Last year, for example, the 50-year-old Susann from the Schliebener Land in Brandenburg or Baby Wesley from Neumünster in Schleswig-Holstein were rescued after appropriate appeals.

Paul from Lübben and his family do not give up hope either. Paul’s four-year-old brother Ole put it very simply for the appeal for donations: “My brother Paul is not here … I always have so much fun with him and love him very much … Mom says Paul needs a lifesaver …”.

Zorc comments on rumors of change about Julian Brandt 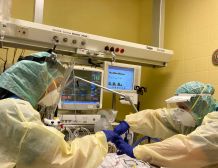 “Out of control” – Corona even more dangerous after mutation –...