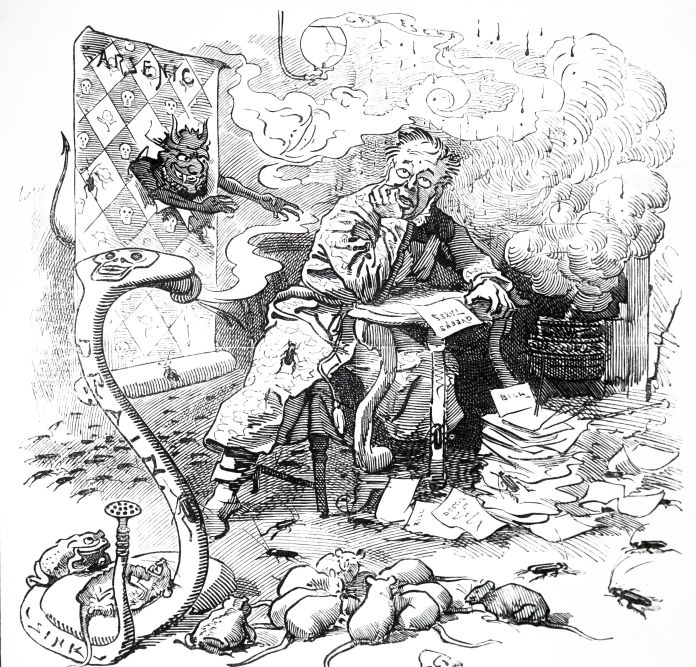 How did the past smell? Like the streets of London in the 18th century, the Spree in Berlin a few hundred years ago, when people disposed of their rubbish in the river? Or the Battle of Waterloo? Sweat, blood and horse smell will have been there, as well as gunpowder. But what else? Which scents, smells and olfactory practices were part of everyday life? These are the questions that European historians and scholars from six European countries want to address in this year that has just begun. One wonders how this is supposed to work, after all, smell is the most volatile research subject one can imagine. And it’s pretty new to historians.

Odeuropa is the name of the project funded with EUR 2.8 million. And as far as volatility is concerned: Peter Bell, who heads the German team, says: “It doesn’t work without digital humanities.” This interdisciplinary subject is all about the use of computer-aided processes in the humanities and cultural studies. This is the only way to develop and analyze large amounts of historical data. At the moment they have chosen still lifes in which flowers and food are gathered. They train the computer to recognize certain objects: roses, tulips, dogs. Bell calls these paintings “symphonies of smell”. “But a person couldn’t search through hundreds of thousands of images.” The same applies to factual texts, novels and magazines, and in different languages ​​too. That is why computer scientists and computer linguists are also working on the project.

The aim is to publish the data in an online encyclopedia of smell that is publicly available. But there should also be recipes for smells, and some should actually be reconstructed and used in museums, for example. Then you will be able to breathe history, at least from the 16th to the early 20th century. However, this immediate strong and emotional remembering will not occur, as Marcel Proust described it and as everyone has already experienced – because we have not experienced the olfactory context of the past. This sensual approach is always appealing.

But it’s not just about the smells themselves, but also about how they were perceived, says Peter Bell. His colleague in England, Will Tullett, a historian at Anglia Ruskin University in Cambridge, says the nose gets used to the smells around it. “For us a city in the 17th century might smell bad, but people back then were probably used to the smell.” But if you were to transfer someone from such a city to Berlin today, they would probably feel safe from the car exhaust, the smell of snacks and disgusting these days also from disinfectants, says Tullitt.

Amsterdam was once the virgin with bad breath

His Dutch colleague Caro Verbeek from the Vrije Universiteit Amsterdam contradicts: You never get used to some smells. In the 18th century, wealthy Amsterdam citizens would have left the city in the summer to escape the stench of the canals that once served as sewers. “The nickname of the city was: the virgin with the bad breath.” For the Rijksmuseum, Caro Verbeek and the perfumer Birgit Sijbrands reconstructed this smell: It consists of moisture and the smell of mold, resin and spices that were thrown into the fire to make the from To whitewash up the stench penetrating outside: sulfur, sewer stench from the sewers, horse smell. But sometimes the scent of linden blossom too. “Back then, the city administration planted linden and elm trees so that the air smelled better,” says Caro Verbeek.

Tullett’s thesis was contradicted almost 40 years ago by the French historian Alain Corbin in his social history of the smell “Plague and Blossom Scent”, which served as the source for Patrick Süskind’s novel “Perfume”. In it, Corbin describes how the streets of Paris are paved, rivers canalized, private toilets introduced and shared beds abolished – all in the name of fighting the stench. The hygiene campaign is carried out because it is believed that stench can transmit disease. But a kind of class consciousness also grows out of the unwillingness towards bad smells. To put it simply: the bourgeois smells fragrant, but subtle, smells poverty.

The researchers from Odeuropa are also interested in pleasant smells: the smell of herbs, flowers, spices, for example – and of tobacco. For a long time, the latter was perceived as a fragrance, but that no longer applies today. “Smells are also discursive,” says Peter Bell. “The connotation is constantly changing.”

How did factories or department stores smell?

This also applies to the type of smell itself. Food chemist Andrea Büttner, who is part of the German team and holds the chair for aroma and odor research at the University of Erlangen-Nuremberg, draws attention to this. When you talk to her, you understand how complex the research field odor is. Materials as well as vegetables and fruits have changed, she says. “Old types of carrots, for example, have a completely different aroma and smell than those that are sold in supermarkets today.” And how a sewer smells, for example, is also related to how people eat.

By evaluating masses of image and text material, the researchers also hope that their noses will be directed in unexpected directions and that they will encounter smells that are not yet familiar to them. But they have already identified some fragrant key locations: coffee houses of the 18th century, factories of the 19th century, department stores of the late 19th and early 20th centuries.

Senate – Berlin – Berlin does not prescribe FFP2 masks in...

Berlin extends partial lockdown – for a ban on skiing holidays

Stiko boss Mertens: No reason for teachers to be vaccinated earlier Merkel for a cautious opening strategy