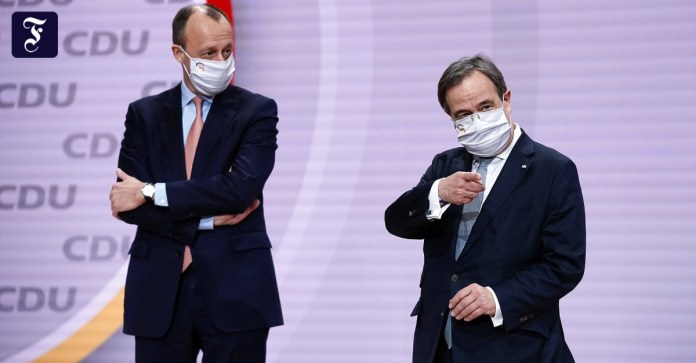 Et could be that Friedrich Merz overstimulated his hand this time. On Saturday at the digital CDU party conference it was still very good. Merz was only barely defeated by the North Rhine-Westphalian Prime Minister Armin Laschet in the election of a new chairman. Not even thirty of the 1001 delegates would have had to vote against Laschet and for Merz in the runoff election, and Merz would have been.

That could have been the starting position for a very strong role in the CDU and, if so, in the government of a Chancellor Laschet. Merz, however, refused to be involved in the party presidium, made the irrevocable demand of Laschet to get him the place of economics minister in the last cabinet of Chancellor Angela Merkel, and, as expected, flashed off.

Anyone who then spoke to loyal Merz supporters encountered incomprehension for this bold maneuver. Not everyone wanted to make this known publicly. Behind the scenes one could hear that Merz had harmed himself, which was suggested by many reactions in his camp. If he had hoped that he could score points with his fans with the accusation that they did not want him in the government, it was a misjudgment, it was said.

One, perhaps the most important political supporter of Merz, expressed himself publicly. After the horror subsided somewhat, the deputy chairman of the Union parliamentary group in the Bundestag and chairman of the SME Union, Carsten Linnemann, said on Monday that Friedrich Merz’s approach had “more than irritated” him.

Linnemann, who had already supported Merz when it approached the chairmanship in December 2018, told the internet portal of the television broadcaster n-tv: “We are in the midst of the worst crisis this Federal Republic has ever experienced. Entire areas of the economy are on the brink, waiting for help. We have to concentrate on that now. “

Linnemann had called the narrow defeat of Merz “disappointing” on Saturday. “That will have happened to every Merz supporter,” he added on Monday. He would have been happy about Merz’s candidacy for a place in the party presidium. “If Friedrich Merz had wanted to join the presidium, a solution would have been found.”

The  election has now been decided, he will support the new CDU chairman Armin Laschet, the chairman of the SME Union announced.

In the CDU there was noticeable relief on Monday, above all, that the party congress went digital without any significant problems.

The  result of the written election, which is required for legal reasons, will be announced on Friday. It is expected that some of the previous Merz voters will vote for the only candidate in the postal vote, Laschet.

In the CDU, a slight frown was noticed on Monday at how clearly the CSU chairman Markus Söder had risen to the top interpreter of its result immediately after the party congress. Of all the other CSU members, however, little was heard in the days after the CDU party congress, apart from congratulations to Laschet. This also had to do with the fact that the closed session of the CSU parliamentary group had been canceled due to Corona – but not only.

Restraint is the order of the day in the CSU

Usually MPs publicly praise the leadership qualities of their bellwether if they want to improve its reputation. That was the case in the power struggle between Söder and Seehofer. At the moment, however, restraint seems to be the best method in the CSU to secure the boss’s favor.

The  times are too volatile, and it is clear to everyone that in the end the decision on the candidacy for chancellor on the part of the CSU will be made by Söder alone. If he considers it necessary that CSU people, especially those with weight, demand his candidacy, then he will get in touch.

As one of the few, the chairwoman of the Upper Bavarian CSU and state parliament president Ilse Aigner had recently commented on the topic – and advised Söder to stay in Bavaria. It cannot be completely ruled out that it was a ruse, because Aigner is said to have ambitions to inherit Söder in the State Chancellery if the worst comes to the worst.

The  Free Voters are no stranger to any deeper meaning.

The  coalition partner of the CSU in the state parliament demands more vehemently than any other party that Söder should go to Berlin. Not only in the CSU believe that the Free Voters wanted to get rid of such a strong competitor and put themselves in the pleasant position of being able to blame the CSU for everything that comes from Berlin.

The  CSU itself does not really know whether Söder would be better or worse deployed in Berlin than in Munich. At least among CSU members of the state parliament, the dominant view is that with Söder as the top candidate in the next state election, your own mandate should be easier to defend. For the same reason, a comparatively large number of CSU members of the Bundestag would like Söder to be the top candidate for the Bundestag election. A survey in November again showed that the majority of CSU members want to keep Söder in Munich.

The  CSU could live with Laschet

And what about Laschet? He’s not someone who would have knocked many people off their feet in Bavaria. In the latest “Bavaria trend” of Bavarian Broadcasting, it was still behind Merz and Röttgen in the vote of both Bavaria and CSU supporters.

In the CSU in particular, however, there is an appreciation for people who are able to prevail against the trend and then deliver their best performance when it matters. Like Laschet.

The  CSU could live with him. But does Söder want that too? At the moment they are playing for time.

The  core of the statements of the leading CSU people was recently: no rush in the candidate selection.

China manufacturer has installed Trojans on more than 20 million smartphones

Cooperation with CureVac: Bayer shares go out of business in a...

Michael Wendler: Father blames him for his mother’s death

Significant decline in new infections in both Basels

AstraZeneca is “safe” according to EMA – SALZBURG24