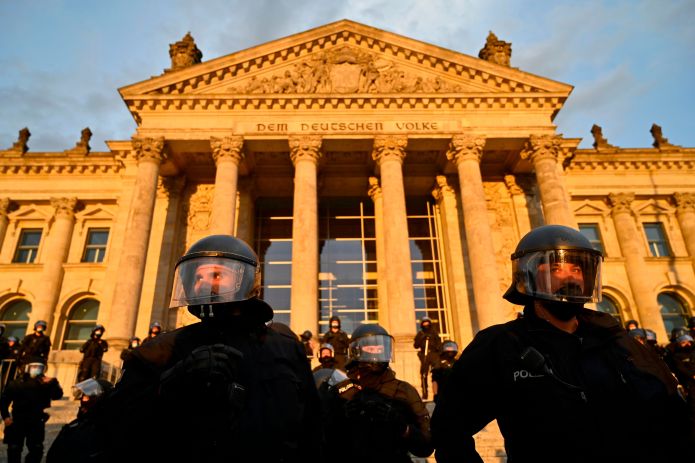 BerlinAn attack on the heart of US democracy is what the American media and elected officials called the storming of the Capitol in Washington. On Wednesday afternoon, a mob broke into the parliament building in the US capital and used force to gain access to offices and plenary rooms.

In this country, the dramatic scenes awakened memories of the occupation of the Reichstag stairs by around 400 so-called Reich citizens in August last year. At that time they did not try to get into the building. But would that have been possible? Bundestag President Wolfgang Schäuble announced on Thursday that he would examine “in close coordination” with the security officers of the parliamentary groups as well as the State of Berlin and the Federal Ministry of the Interior, which conclusions must be drawn from the events in Washington for the protection of the Bundestag. The Bundestag press office announced that a report had already been requested from the German embassy in Washington on how the excesses of violence could have occurred within the Capitol.

Possible improvements in security are also currently being discussed in the Berlin police headquarters, the state criminal investigation office and the responsible police section – such as increasing the police presence. The protective measures – both of the US embassy and the Reichstag building – would be adjusted as required, a police spokesman said on Thursday. “In this context, the recent events in Washington are also included in the assessment.” The spokesman does not provide any details.

Berlin’s government district is a bulwark compared to Washington

How so many people could penetrate more or less unhindered into the heart of US democracy is still largely unclear. Because the Capitol is not just open to every citizen. Since the terrorist attacks of September 11, 2001, visitors are only allowed to enter it in organized groups or as guests of MPs.

Different rules apply to the offices of Senators and Congressmen, most of which are located in the buildings around the Capitol. Entirely committed to the principle that the delegates are servants of the people, access to the people’s representatives should also be as unproblematic as possible. To get to their offices, you just have to pass a simple security gate with a metal detector, after which you can walk from senator’s office to senator’s office yourself as a tourist – the doors of which, by the way, are often demonstratively open.

In comparison, the Berlin government district is a fortress. It is almost impossible for unregistered visitors to enter the Reichstag or the offices of the members of the Bundestag. And anyone who has an invitation from a parliamentary group or member of the government – which is usually preceded by a security check – is not allowed to wander around in the Reichstag. The registered visitors will be picked up at the gate by an employee of the parliamentary office and have to pass a lock that can only be opened by security personnel. This is followed by a check with metal detectors. Anyone who has come through all of this is not allowed to move around the buildings unaccompanied. Exceptions only apply to accredited press representatives.

Access to the plenary hall in the Bundestag is particularly strictly regulated: Here visitors are only allowed in the guest and press stands. Only members of parliament, members of the government and their representatives, hall staff and selected guests, such as guest speakers, have access to the plenary session. Access is accordingly more difficult. The doors of the plenary chamber cannot be opened from the outside without further ado – Bundestag employees have to unlock them. That is why it is hardly possible that unauthorized persons – as happened in the Washington Capitol – take a seat on the place of the President of the Bundestag.

More police officers and barriers in front of the Bundestag

But the occupation of the outer steps of the Reichstag in August had already caused widespread horror. It was only a few minutes. “But the power of images counts here,” said Berlin’s police chief Barbara Slowik afterwards in the interior committee. She was very ashamed of these images. “In the future we will protect the barrier lines to the Reichstag even more clearly, even more closely.” As a consequence, the police increased the protection of the building with police officers and barriers.

The police have also revised their concept for rallies in front of the building. The “storming of the Reichstag”, which was surprising to them, was possible at the time because there were only two rows of barriers between the Reich Citizens’ rally in front of the house and the stairs, but hardly a police officer. The head of operations had simply underestimated the danger. Because Reich Citizens’ rallies had already taken place there regularly – without incident. An officer who is familiar with deployment planning says that routine has crept into the police. Perhaps that was also the case in Washington, where there are regular peaceful demonstrations in front of the Capitol.

No hope for a cure: Magician Siegfried is said to be...

“No threatening discussion”: Corona deniers at Kretschmer am Zaun

Thomas Gottschalk’s “DSDS” appearance could pay off for Dieter Bohlen

Bayer: Forgot glyphosate in 2021 with a wide moat?

Curfew: French are not allowed to leave the house on New...

This is what the vaccination plan for Germany looks like