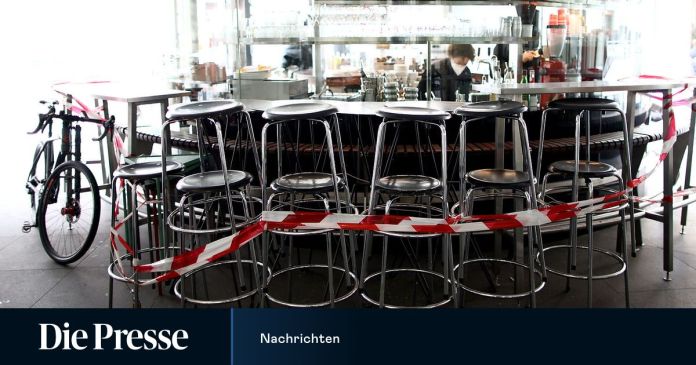 The  short-time working will be extended and supplemented with a bonus payment and a “liquidity aid”. A 30 percent default bonus of up to 60,000 euros is also planned. Culture has to wait longer, only museums can expect a start on February 8th.

Austria will remain in lockdown for longer: As the government announced on Sunday, lockdown will remain in place until at least February 7th and will not end on January 24th as originally planned.

The re are also further tightening such as an FFP2 mask requirement. Chancellor Sebastian Kurz (ÖVP) argued the extension on Sunday morning with the spread of the British variant of the virus, which is likely to be much more contagious than the previously known form. But what does all this mean in detail – for entrepreneurs and artists? For tourism and gastronomy? For the students it means in any case:

The y too have to go to school longer than announced a few days ago.

Finance Minister Gernot Blümel, Tourism Minister Elisabeth Köstinger, Education Minister Heinz Faßmann (all ÖVP) as well as State Secretary for Art Andrea Mayer and Vice Chancellor Werner Kogler (both Greens) asked themselves these questions on Sunday afternoon. “I would like to stand here and announce that more is possible,” said the latter at the beginning of the media event. “Even if it’s annoying,” he continued: “We have to put our personal wishes aside, responsibility comes first.”

The  order of the day is therefore once again: “Protect yourself and your environment.” He knows that “medicine It doesn’t taste good when it is administered, but it works. ”This applies above all to cultural workers, sports clubs, tourism and gastronomy, which have been hit hard by the pandemic and the associated restrictions.

To help them, the Short-time work extended and adapted will.

The  new thing about it: A bonus payment is to be introduced because the situation has become more difficult, said Kogler. And: in the future there will also be an advance payment in order to create liquidity.

The  payments should be based on sales from the past.

Already existing Fund to support cultural workers or non-profit organizations should be extended to June.

New: cancellation bonus for every month

Blümel added that the virus mutant was “bad news for the whole country”. To date, 2.4 billion euros have been transferred via the revenue replacement.

The  so-called Fixed Cost Grant II was also created in order to be able to help as quickly and unbureaucratically as possible.

The  new situation now makes it necessary to make further improvements: In addition to the fixed cost allowance and loss compensation up to 30 percent compensation for failure, up to 60,000 euros, valid for each month until the end of the crisis.

The  sum of the income from the previous months would have to be stated, “then the money will flow,” said Blümel.

One problem remains that, according to EU law, each company may receive a maximum of three million euros in aid for the loss compensation or 800,000 for the fixed cost subsidy and the new loss bonus is included there. Austria is working with Germany, Denmark and the Czech Republic to raise this cap, said Blümel.

The  new cancellation bonus will apply to all companies that are unable to generate sales, either directly or indirectly, due to business closings. Half of the support measure (up to 15 percent of sales) is a newly added sales replacement, the other half an advance on the fixed cost subsidy.

The  comparison period for the default bonus is the same month 2019. To get the money via application in FinanzOnline, you have to “click four times, enter the sum of the income from the comparison month, and then the money will flow,” promised Blümel. “Sometime this year” one would also have to submit an application for the fixed cost subsidy 2, but that could also be done after the application for the cancellation bonus.

Tourism remains in the dark

Tourism Minister Elisabeth Köstinger pointed out that the closure of the hotel industry in February, the strongest month in winter tourism with 17 million overnight stays, was “an economic catastrophe”.

The  hotel and catering companies will be given “the best possible support”. Blümel explained that the federal government’s aid measures had ensured that there were 30 percent fewer bankruptcies in Austria since March 2020 than in the same period. For Köstinger, this is “an unmistakable sign that the federal government’s economic aid is also arriving”.

However, tourism must be prepared for the fact that there will be a challenging time even after the corona pandemic. “Tourism, the freedom to travel, it will all take years to fully recover”.

However, announced new corporate aids such as the so-called default bonus are “important and necessary steps to ensure the liquidity of all businesses affected by the extension of the lockdown”, said Harald Mahrer, President of the Chamber of Commerce (ÖVP).

The  trade association, however, was “stunned” and wants a “survival aid”.

The  help had to “finally arrive”, demanded Rainer Will, Managing Director of the Trade Association. This applies to both directly and indirectly affected companies. “

The  federal government has assured the population that no one will be left behind in this crisis. This promise must now be kept and the survival aid flowed immediately, otherwise we face an economic collapse this year.”

It is gratifying that there is now the so-called cancellation bonus. “

The  amount of 30 percent of the sales shortfalls compared to the previous year is just as completely inadequate for the industry as the upper limit of 60,000 euros, which fails to recognize the liquidity situation of the companies,” said Will. “In view of the massive expansion of the official closure, there can be no question of a bonus.”

The  cap of just 60,000 euros will only cover a fraction of the actual sales losses in lockdown for many of the companies affected.”

For SME dealers, they set the amount of a maximum of 30 percent far too low, according to the trade association representative. It belongs to “urgently improved”.

Museums are allowed to open on February 8th

The re is nothing to gloss over,” said State Secretary for Culture Mayer.

The  next few weeks would be tough. No opera, no theater and no date for the restart can be announced today, Sunday. For Museums, exhibitions, libraries and libraries On the other hand, she has something concrete:

The se houses can unlock again on February 8th. However, visitors must wear an FFP2 mask.

Due to the extension of the lockdown, the Salzburger Landestheater has already announced that it will move its performances online. Some of the planned theater premieres will take place via internet stream, announced the

The ater am Sonntag in a broadcast.

The  existing aid instruments in the field of culture, from the hardship fund of the WKÖ to the SVS bridging funding to the Covid-19 fund of the artists’ social insurance will be extended until the end of June. In the cultural sector, the announced “failure bonus” should not only apply to profit-oriented companies such as cinemas, cabaret theaters, agencies or film distributors, but should also be replicated within the framework of the NPO fund for non-profit organizations. In addition, Mayer announced another lockdown bonus for artists, which will amount to a total of 1000 euros per approved application for January and February.

The federal councilors want to be vaccinated against Covid-19

Young Muslim in France celebrates Christmas – and is attacked

Does it have to be an Apple power supply for the...

For election victory? He apparently wanted to exchange Justice Minister