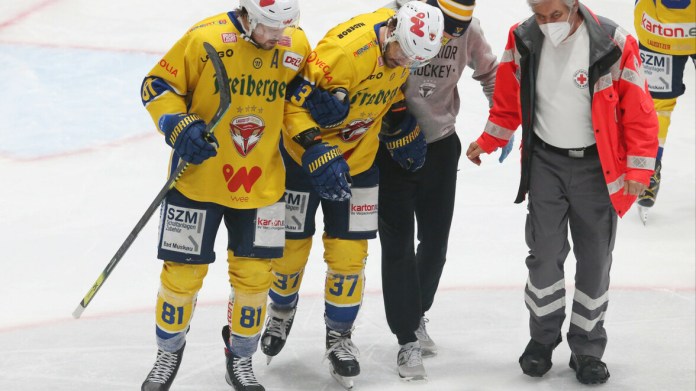 The  Lausitzer Füchse can not confirm the good performance of the peat festival on Friday and lose against the Löwen Frankfurt with 1: 6. Top scorer Kale Kerbashian, who almost single-handedly made the 7-3 win against Bad Nauheim on Friday evening with four goals, remained goalless in the game against Frankfurt.

Meanwhile, Bad Nauheim’s Noureddine Bettahar, who was punished with a large plus game misconduct penalty in the 39th minute on Friday for a stick stab, was suspended by the disciplinary committee for two games and a fine.

Brad Ross had to leave the field early

After just three minutes, the first moment of shock came for the foxes on Sunday evening. Captain Brad Ross was curled up in pain on the ice and had to be carried limply from the field and straight into the cabin.

As a result, the foxes were repeatedly pushed back into the defensive third.

The  free-standing lion Kyle Wood missed the chance to lead the hosts in the 7th minute. On the other hand, Tomas Andres also missed a big chance. He stood completely free in front of goalkeeper Bastian Kucis and did not get the puck over the line (8th).

The  1-0 for the Löwen Frankfurt fell in an outnumbered situation. Tomas Andres was serving a time penalty and had to watch the Lions succeed in the third shot from distance. Kyle Wood gave the hosts the lead (15th). Luck for the foxes, because only a few minutes later MacAuley missed the chance to make it 2-0 (17th) because the puck jumped in front of the empty goal.

The  second third started with good news: Brad Ross was able to return to the ice. But even he couldn’t do anything against Luis Schinko when he grabbed the puck behind his own goal and crossed the whole field in a brilliant save without being stopped and finally netted to make it 2-0 (26th). Just five minutes later, Sebastian Collberg was able to fight his way through the defense with almost no resistance and with a shot under the crossbar made it 3-0 clear (31st).

Foxes trainer Corey Neilson put everything on one card again at the beginning of the last third when he took Mac Carruth out of the gate for the second time in an outnumbered situation. But this time the attempt to force the connection hit backfired: Manuel Strodel hit the empty goal to 4-0 (46th) with his attempt to clarify from his own third. In the 53rd minute, Darren Mieszkowski made it 5-0.

It took a double majority for the foxes to score their honor that evening. Nick Ross converted to 1: 5 in the 54th. Just three minutes later, Mac Carruth was unable to capture a concealed shot from a distance.

The  rebound landed at the feet of Stephen MacAuley, who netted to 6-1 (57th).

While the Lausitzer Füchse will meet the Eispiraten Crimmitschau in the Derby on Tuesday evening, the Löwen Frankfurt will also have a tight schedule.

The  Hessians were only able to play 18 games – more than any other team in the DEL 2. To catch up, the team sometimes has to go back to the game every two days.

That’s what the coaches say about the game

Corey Neilson (Lausitzer Füchse coach): “We did a lot of good things in the course of the game and, above all, worked well offensive.

The  difference today was the special teams.

The  lion’s power play is really good. We used a lot of young players today, outnumbered, which you saw. Above all, Dietz was missing, who is a good outnumbered player and would definitely have helped today. Our power play wasn’t good either. But Frankfurt is also a very strong team. We tried everything, even after we lost Ross. “

Franz-David Fritzmeier (Löwen Frankfurt coach): “Great praise to my team. Today we rewarded ourselves by using most of our chances and scoring a few nice goals. But the basis was that we defended well today. Bastian Kucis was also very good in the crucial situations.

The  whole team did a very good job today. “

Kaufland is allowed to take over 92 stores from Real