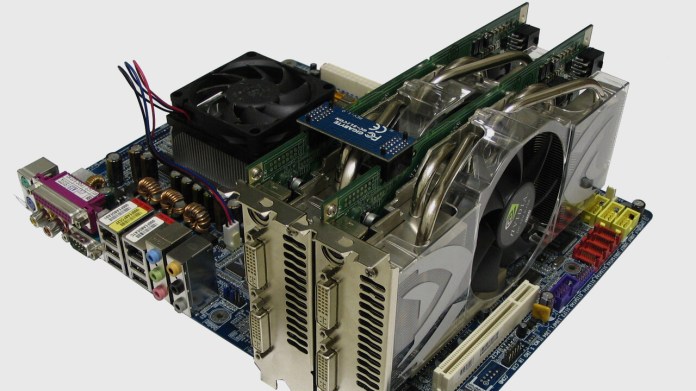 The GeForce 7800 GTX 512 (tested 15 years ago) represented the ultimate in graphics cards in January 2006. For users who wanted even more, ComputerBase tested an SLI combination of two of the high-end graphics cards (test).

Like the original GeForce 7800 GTX, the GeForce 7800 GTX 512 was based on the G70 GPU, which, however, worked with significantly higher frequencies thanks to an optimized manufacturing process. The GPU clock has been increased from 430 to 550 MHz and the memory clock from 600 to 850 MHz compared to the original. Thanks to this significantly higher raw performance and twice the video memory, the new model was able to set itself apart in games. Since the GeForce 7800 GTX 512 supports Nvidia’s Scalable Link Interface (SLI), two graphics cards of this type can be interconnected for higher performance. In SLI mode, the graphics cards then alternately compute the frames (alternate frame rendering).

High resolution and anti-aliasing were the trump cards

Aside from the twice as high acquisition costs, the operation of two high-end graphics cards had other disadvantages. The power consumption of the entire system increased from 235 to 334 watts and the GPU temperature from 87 to 97 degrees Celsius under load. In addition, the fans of the SLI team worked around 50 percent louder than when operating a single GeForce 7800 GTX 512.

The high GPU temperatures also meant that the graphics card network could not be operated on most mainboards. If there wasn’t enough space between the two PCIe slots, the system crashed immediately under load. If you absolutely wanted maximum gaming performance, you were in good hands with two GeForce 7800 GTX 512 as long as you could live with the negative points. For everyone else, more than 1,000 euros for two graphics cards was probably too much anyway.

In the “Tested 15 years ago” category, the editorial team has been looking into the test archive every Saturday since July 2017. The last 20 articles that appeared in this series are listed below:

Even more content of this kind and many more reports and anecdotes can be found in the retro corner of the ComputerBase forum.

“Angry and angry” about vaccination violations by mayors

Xiaomi Mi 11: The most important data and information about the...

Despite the ban on demonstrations: “Unconventional thinkers” in Frankfurt

Bitcoin and Elon Musk: Bitcoin is growing out of its infancy

No “Let’s Dance” comeback: Ekat reports to her fans