The head of the Mainz biotech researcher Biontech, Ugur Sahin, is astonished by the hesitant vaccine orders from the EU. The process in Europe was not as quick and straightforward as other countries, said company boss Sahin the “ Spiegel”. “ Also because the European Union is not directly authorized, but the states have a say.”

The EU has also relied on other manufacturers who are now unable to deliver so quickly. “ Apparently the impression prevailed: We’ll get enough, it won’t be that bad, and we have it under control,” said Sahin: “I was surprised.”

In order to make up for the lack of vaccine due to the reluctant EU purchasing policy, the Mainz-based company is working flat out on building new production capacities for the corona vaccine. “ At the moment it doesn’t look rosy, there is a hole because there are no other approved vaccines and we have to fill this gap with our vaccine,” said Biontech boss Ugur Sahin to “ Spiegel”. But Germany will “get enough vaccine”.

The idea of ​​the EU and other governments to put together a basket from different providers actually makes perfect sense, explained Biontech chief physician Özlem Türeci. “ At some point, however, it turned out that many of them cannot deliver on time. Then it was too late to order extensively elsewhere.”

According to “ Spiegel”, the USA secured 600 million cans from Biontech in July, twice as many as the EU, which only placed the order in November. “The process in Europe was certainly not as quick and straightforward as it was in other countries,” said Sahin.

Biontech is looking for partners to expand production

The first vaccinations in Germany were on December 27th. Increasing production in the short term is “anything but trivial”: “ It is not as if specialized factories all over the world were idle and could produce vaccines of the required quality overnight.” Biontech has already “commissioned five manufacturers in Europe to support production,” said Türeci. “ Further contracts are being negotiated.”
Several politicians recently called for vaccine production to be significantly accelerated. FDP leader Christian Lindner called for the legal, economic, political and technological prerequisites for “crisis production” to be created. Bavaria’s Prime Minister Markus Söder (CSU) also called for more speed in vaccine production.

With regard to the changed corona viruses, the Biontech boss was confident. The immune response triggered by the vaccine recognizes the virus antigen in many places. “ Although the virus can make some of its recognition sites unrecognizable through a mutation, it cannot change so fundamentally that it becomes invisible to the immune system,” explained Sahin. Most recently, significantly more contagious corona viruses had emerged from England. He wasn’t worried about them anyway, said Sahin. “ We are testing whether our vaccine can also neutralize this variant, and we will soon know more.”

What worries him, however, is “that the mutant apparently originated in patients with a suppressed immune system. There the virus had free rein and months to optimize itself. That could mean that there will always be biotopes in which it can improve. ”

Biontech chief physician Türeci expects the immunity from the vaccination to last at least as long as the natural one after an infection. “ And we know that with the second dose we further increase the body’s immune response. That means: You could achieve an even greater effect with a third injection, about a year later,” said Türeci optimistically.

The riddle continues: the first monolith appeared in Germany

Mandy Capristo: She shares a private snapshot – is he new... 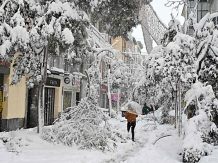 Madrid is only slowly recovering from snow chaos – world –