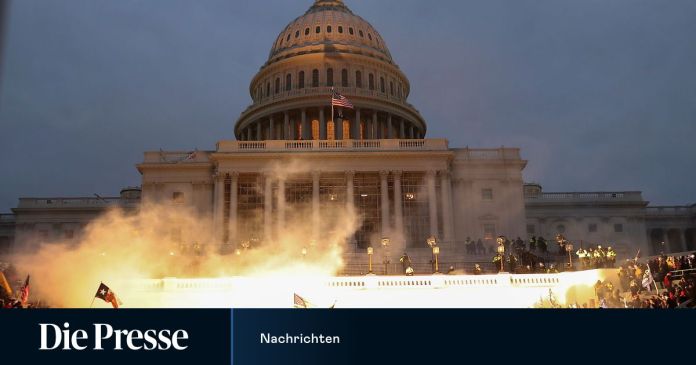 The congressional session to confirm the election result was suspended, Trump supporters gained access. The area could be secured after hours. One person died from a gunshot wound. Bomb finds raise further question marks. A curfew comes into effect. Biden speaks of “riot”. Trump renewed his election fraud allegations, but also called for withdrawal.

“Remember this day forever”. With these words, US President Donald Trump closed his latest tweet amid the chaos in Washington. And it is a day that will actually go down in US history and once again openly flaunted the division of the US: demonstrators, some openly armed with right-wing extremist and violent groups, penetrated the Congress, where a decisive session recognize the result of the US presidential election. The meeting was suspended. Only hours later, shortly before 6 p.m. local time (0 a.m. CET), the entire building is said to have been under police control and thus cleared.

Those intruders who had made it into the Capitol building marched through the National Statuary Hall, in which statues of well-known Americans are exhibited, or sat down in the office chairs of representatives, as pictures showed. An intruder put his feet on the desk of the Democratic House of Representatives, Nancy Pelosi, and left a piece of paper with the message “We won’t back down”. Several protesters have also broken into the Senate Chamber. Vice-President-elect Kamala Harris has been brought to safety, according to an employee. The place is kept secret. Pelosi and Vice President Mike Pence were also brought to safety. Members of the stormed US parliament spoke of a “coup attempt” in media interviews.

Street battles raged before that. Trump supporters did not let the police, the announced National Guard and even Donald Trump’s double-edged calls on Twitter deter them from further arguments with the security forces. Only hours after the escalation began, the police finally cleared the steps and platforms in front of the congress building. A bang and a flash of light – apparently a stun grenade from the police, should push people back further. Dusk broke over Washington DC, adding to the turmoil. The Mayoress of Washington DC, Muriel Bowser, ordered a curfew between 6 p.m. in the evening and 6 a.m. (local time, starting from midnight Austrian time).

The Washington National Guard was activated. The state of Virginia is also sending the National Guard and 200 state police officers to the neighboring capital, as announced by Governor Ralph Northam. “On the instructions of President Donald Trump, the National Guard is on the move with other federal protection services,” wrote Trump’s spokeswoman Kayleigh McEnany on Twitter.

In the riots in and around the Capitol, one person was shot and later succumbed to their injuries, Reuters news agency reported. The chief of police in the US capital, Robert Contee, said at a press conference on Wednesday that the shot victim was “a civilian”, further details are not yet known. Media reported that a woman was shot in the chest. The broadcaster NBC News also reported several injuries, citing security forces.

An explosive device has also been found near the Parliament building. However, the subject is no longer dangerous, reported the US news agency AP on Wednesday with reference to authorities in Washington. At first it was unclear what kind of explosive device it was.

The “New York Times” reported that a pipe bomb had also been found at the party headquarters of the Republicans. It was therefore destroyed by police experts. The nearby Democratic Party headquarters was evacuated after a suspicious package was discovered.

President-elect Joe Biden said: “At this hour our democracy is under unprecedented attack.” He was “really shocked and sad that our nation – so long beacon and hope for democracy – has arrived at such a dark moment,” said Biden in a TV speech. “Storming the Capitol, breaking windows, occupying offices, occupying the United States Senate, rummaging through the desks of the House of Representatives in the Capitol, and threatening the safety of duly elected officials is not a protest,” Biden said. “It’s riot.”

A little later, Trump spoke up again on Twitter – this time in a video message. He called on the demonstrators to go home peacefully – but at the same time he once again poured fuel on the fire: “This election was given to me, it was stolen from us”. He understands the anger of the “good people”, but “we have to have peace, we have to have law and order” and respect the security forces, said Trump on Wednesday in a video message distributed on Twitter.

Trump had previously written on Twitter: “Stay peaceful!” He called on the demonstrators to support the police and security forces who were “on the side of our country”. In another tweet he renewed his appeal: “No violence! Remember, WE are the party of law and order – respect the law and our great men and women in uniform. Thank you! ”Trump did not instruct his supporters to end the protest he had called on them to end.

Thousands of Trump supporters had originally protested in front of the Capitol against the impending confirmation of the election victory of Democrat Joe Biden. Members of right-wing extremist groups and vigilante groups also took part in the event entitled “Save America March” on Wednesday. TV images showed a large crowd of people standing close together on the steps directly in front of the entrance to the Capitol and scuffling before one Group finally paved a way inside.

Trump: “You don’t resign if theft is involved”

Shortly before the start of the congressional session, Trump appeared in front of his supporters, repeated his baseless election fraud allegations and called on his supporters to move to the Capitol. You are unlikely to put up with the “theft” of choice. “You don’t step down when theft is involved,” he said. “Our country is fed up and we will not accept it any more.” The outgoing president announced that he would “never” recognize his defeat in the presidential election.

Trump lost the election to Biden by a clear margin in early November. But he refuses to admit defeat. Trump claims he was robbed of victory by massive fraud. Neither he nor his lawyers provided any convincing evidence. Dozens of lawsuits from the Trump camp have so far been thrown out of courts, including the US Supreme Court.

At the opening of the congressional session, at which the election result was to be certified, Pence said that the constitution prevents him from deciding “unilaterally” about “which votes should be counted and which should not”. Shortly before, Trump had appealed to his deputy to prevent the election certification. “If Mike Pence does the right thing, we will win the election,” he said in front of thousands of demonstrators in Washington.

The day before, Trump had claimed on the online service Twitter that the Vice President had the “power” to prevent a “fraudulently chosen elector”. In fact, the Vice President does not have the authority to reject an election result.

Before the session was suspended, Senate Leader Mitch McConnell of the Republicans turned on an appeal against the Trump loyalists in the party. “If this election were overturned by mere claims by the losing side, our democracy would be caught in a death spiral,” he said. Trump has been claiming for weeks, without giving any evidence, that there was massive fraud in the election. Dozens of election challenges from his camp have been dismissed by the courts.

At the congressional session, Republicans appealed the result from the state of Arizona in an attempt to delay awarding Biden the election victory. A Republican MP from the House of Representatives raised the objections at the joint House-Senate meeting on Wednesday. He received support from Republican Senator Ted Cruz. The objection has no prospect of success. Both chambers of congress would have to agree to an objection, which is considered impossible in view of the majority of Democrats in the House of Representatives.

Biden, who is to take office on January 20, meanwhile, campaigned for unity in the country. After two runoff elections for the US Senate in Georgia saw a Democratic majority in Congress, Biden said, “The American people want action and they want unity. I’m more optimistic than ever that we can do both.”

Bild.Macht.Germany on Amazon Prime Video: Is the series worth it?

Trump casino blown up with 3,000 sticks of dynamite

Earth Hour 2021: One hour of darkness for the world’s climate...