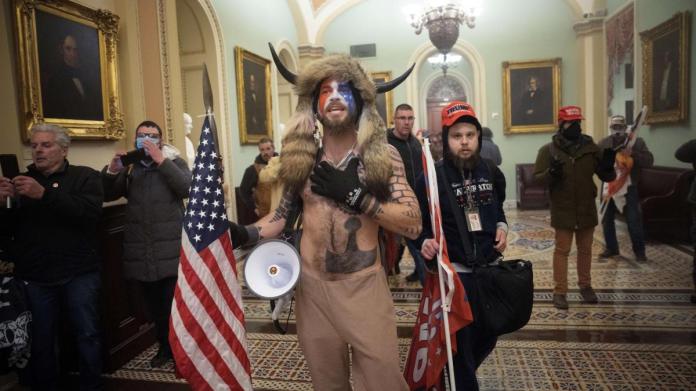 Er got it on the front pages of newspapers worldwide, but no, Jake Angeli doesn’t give interviews to established media such as “The Republic” on principle – he didn’t talk to the spreaders of fake news, he left the US magazine on align his request.

So if you want to know what drives the 32-year-old, who, with his striking appearance – shirtless, fur hat with horns – was one of the most unusual figures among the people who stormed the Capitol in Washington on Wednesday, you have to go especially in the social one Research media.

There are isolated portraits, video snippets, but also verbal contributions by the well-trained tattoo fan, which at least suggest his motives.

In May 2020, for example, he told a reporter for the “Arizona Republic” who spoke to him on the sidelines of a pro-Trump event – apparently undercover – that he wanted to support his president and protect him against criticism from the media.

In a sense, Angeli says that he sees all the criticism in the media of Trump and what he is doing. But there is also another point of view. He (Trump) should see that there are also people who support him, good people, real patriots.

So it’s clear that Angeli was a “real patriot” at the pro-Trump demonstration in Washington on Wednesday and that he even made it to the Capitol together with dozens of other demonstrators.

Jake Angeli is an actor, sometimes at least

The photos of the heavily tattooed man with the striking headgear (a so-called buffalo cap made of fur and with animal horns), who screamed out his triumph, went around the world – and definitely fulfilled a need of the protagonist, namely for attention.

Angeli sees himself as a figure from show business, he dreams of a career as an actor or singer and occasionally works as a voice actor, reports US media. The headgear, the face-painting, the bare torso – all of this serves to attract attention, wrote the newspaper “Arizona Republic”, with which Angeli apparently exchanged a few more sentences.

But in addition to narcissism and longing for the show effect, Angeli apparently also drives an ideology that is widespread in the USA.

Angeli is a “Qanon” fan, so he believes in a conspiracy in the highest circles of government, in secret child molester rings and the ominous, long refuted “Pizza Connection”, which keeps making headlines.

At Qanon it clicked

It is this typical, toxic combination of exaggerated individualism, an exaggerated concept of freedom and conspiracy theories that so many supporters of the (still incumbent) US President Trump share. The source of all these theories is – and Angeli confirmed this in his ultimately quite numerous speeches – the Internet. “At a certain point everything clicked somehow,” he is quoted in a portrait by “Arizona Republic”. Then he thought: “Oh dear God. I now see the reality of what is going on. “

Various key words follow in his remarks, which are also popular in relevant German Telegram groups – about the alleged influence of the Illuminati, the Freemasons and the Bilderberg group, i.e. the actors who would secretly control the world.

It goes without saying that there is also a good deal of anti-Semitism. The self-proclaimed “Q-Shaman” wears a rune symbol on his chest, which is also popular as a tattoo in the neo-Nazi scene and especially among White Supremacists.

The fact that a man like Angeli posed with a bare chest and this tattoo in the Senate should be a shame that the USA will not be able to forget anytime soon – especially since he was not the only one with a questionable worldview: even a protester with one “Camp Auschwitz” -printed hoodie was spotted.

Whether Angeli can benefit from his questionable fame in the long term is open. In any case, financially it looks (still) rather bleak: When he started crowdfunding weeks before the so-called “Million Maga March” on December 12th, which was supposed to reimburse him for the travel expenses of $ 800 to Washington, only 50 came Dollars together. Of course, the Q-shaman made it to the demo anyway – whatever. Protection of the Constitution: “lateral thinking” could become a suspected case...

Historian Frank Snowden does not expect a return to the “old...

Handball World Cup: This is how the hot duels between Germany...