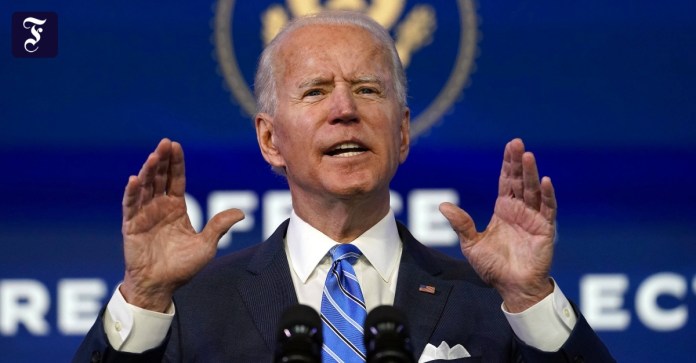 AIn view of the dramatic spread of the coronavirus in the United States, future President Joe Biden wants to significantly accelerate the pace of corona vaccinations in the country. Biden announced on Friday in Wilmington, Delaware, a package of actions aimed at overcoming existing problems and delays in the vaccination campaign in America. Among other things, the disaster control agency Fema is to help set up vaccination centers. Mobile vaccination stations are to be sent to remote areas. Biden also wants to use the pharmacies in the country to also administer vaccinations. In addition, the democrat wants to ensure that other population groups are vaccinated and that the current prioritization is relaxed.

Worldwide, the number of people who have died after a corona infection has only just passed the two million mark. More than 93 million infections have been reported around the globe so far. In absolute terms, the United States is the country hardest hit by the pandemic. In the United States, with a population of around 330 million, more than 23 million infections with the virus have been registered so far. More than 390,000 people have already died from the virus.  The  number of deaths reported within one day broke new records recently – last Tuesday it was more than 4,400.

Swearing in on Wednesday

Biden called the numbers devastating. “We are still in a very dark winter,” he warned. “We are at war with this virus.” One of the goals of the Democrat has declared that at least 100 million vaccine doses are administered within the first 100 days after taking office. He will be sworn in as president next Wednesday.

On Friday, New York Mayor Bill de Blasio and Oregon Governor Kate Brown complained about the vaccine distribution. De Blasio wrote on Twitter that New York will run out of vaccines next week, while other parts of the country have unused vaccine doses.

The re are tens of millions of vaccine doses that are unused in freezers, while people who want and need the vaccine cannot get it.” That must change urgently. Biden’s future government wants to encourage all states to offer vaccinations faster to larger populations. In the United States, similar to Germany, a list of priorities has been drawn up so that particularly vulnerable groups are vaccinated first. However, Biden complained that the implementation was too strict and confusing. He advocated not only giving priority to health care workers, residents and employees in nursing homes, but also offering large numbers of vaccinations for other high-risk professional groups and citizens over 65 years of age.

The  democrat also announced, among other things, that his government wanted to start a large-scale awareness-raising campaign in order to build trust in the vaccines among the population. So far, there has been great skepticism here.

Biden emphasized that Congress had to release money for his plans. On Thursday he presented his plans for another trillion-dollar Corona aid package, in which billions of dollars are also earmarked for the immediate fight against the pandemic – including for a vaccination program and a significant expansion of the corona test capacities.

The  Democratic chairman of the House of Representatives, Nancy Pelosi, said on Friday support for the vaccination plans:

The  chamber is ready to work with the new government to implement the project immediately.

Biden urged them to hurry and at the same time agreed to the aggravation of the situation. “Things will get worse before they get better.”

The  latest warning from the CDC health authority is also of concern, according to which the corona mutation, which was first discovered in Great Britain and is probably much more contagious, could soon be more widespread in the United States than the original variant. “

Corona pandemic in France: New lockdown for Paris and other regions

Fidesz politician to be suspended by EPP group