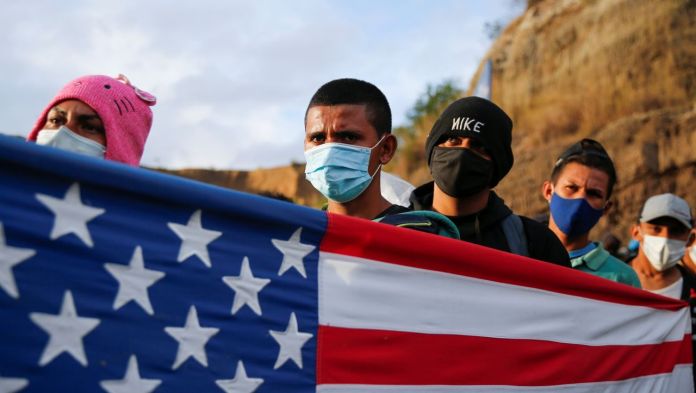 On day one of his reign, US President Joe Biden began to revise the immigration policy of his predecessor Donald Trump. This is good news for the migrants who have just made their way from Central America to the USA.  The y hope that the move in the White House will bring them a better life.
As in previous years, thousands of people from Central America made their way to the United States at the beginning of the year. Up to 9,000 men, women and children left this time, mainly from Honduras.

The y flee from poverty, violence and unemployment.

Because the living conditions and the problems that people in their home countries are exposed to and that have led to an emigration from the region for years have not improved. On the contrary, new ones have been added:

The  corona pandemic is rapidly driving up unemployment in the region. Two hurricanes hit Central America at the end of last year, causing devastating devastation.

The  new government in the White House is a signal to many people about these circumstances. “A new pull factor,” says Jessica Bolter of the Migration Policy Institute in Washington. As an analyst, Bolter focuses on migration movements on the US border with Mexico, asylum issues in the United States and migration policy in Latin America.

The  change of government in the United States will bring fundamental changes in the framework of migration policy, which Bolter will accompany in her research in the future.

US President Biden has already announced that he will be introducing a broad overhaul of immigration laws into Congress. On his first day in office, Bolter lists, he already has a decree

What does that mean now? Will the chaotic images of the past few years, when thousands of migrants jam on the southern border of the United States, be repeated?

To assess this, it is worth taking a look back. Ex-President Trump has done a lot to seal off the borders of the United States. Not only with its wall, but also with a lot of pressure on transit countries like Guatemala and Mexico that should stop migrants. In 2019, Trump cut aid funds for the three countries from which most of the people came. He succeeded in getting the governments of Guatemala, Honduras and El Salvador to stop a large number of people willing to emigrate. Mexico forced the ex-president to cooperate with a threatened increase in tariffs.
Trump also signed asylum agreements with third countries like Guatemala and deported asylum seekers from Central America who had sought protection in the United States. Instead of the United States, they should apply for asylum in Guatemala. With these agreements, the Trump administration effectively undermined the right to seek asylum in the United States. However, all of this had more symbolic character than effect.

A report by the US Senate, quoted by the Washington Post, explains the consequences of this policy: Since November 2019, the Trump administration has deported 945 asylum seekers, mainly from El Salvador and Honduras, to Guatemala. Only 34 of them have applied for asylum in the country – and none of them has yet been granted asylum.

Guatemala, shaken by gang violence, is – according to the US Embassy in Guatemala – one of the most dangerous countries in the world. Like Honduras and El Salvador, where the third-country agreements should also apply, Guatemala has not even rudimentarily developed an asylum system.

The  country is completely overwhelmed with the fulfillment of the agreement.

The  Biden government has already announced that it will suspend Trump’s asylum agreements with third countries and accept asylum applications again. However, she warned the migrants not to travel any further: US immigration policy would not change overnight. “

The  rule that someone who crosses the border illegally will be deported and not given access to asylum will remain in place for the time being,” says expert Jessica Bolter. Biden had communicated that his government would need “at least the next six months” to shape a “more humane asylum policy”.

Bolter says there is great concern that there will be chaotic scenes again at the border and that these will hamper Biden’s progressive agenda. “Before the government re-opens access to asylum, it will endeavor to set up a better-functioning asylum system at the border so that the requests can also be managed.”

The  Biden government will endeavor to work well with the Central American countries to better control migration flows in the region.

The re are already approaches to set up asylum centers in these countries so that those seeking protection can submit their applications locally. Biden has also announced that it will focus on the causes of flight in the Central American states.

The  trek from Honduras with 3,000 migrants was broken up by security forces in Guatemala at the beginning of the week. According to observers, some groups are said to continue moving towards Mexico. Thousands, however, have been stopped and some have been sent back to Honduras. Guatemala, which also justified its hard-handed policy with the risk of infection in the pandemic, continues to perform the role as a bouncer assigned by Trump after he has left the White House.

This role could change in the future. “

The  Biden government will certainly see regional partners more as partners in the future, whereas Trump only shaped his migration policy through pressure,” says Bolter.

Migrants will move towards the USA in greater numbers

Bolter expects that the people will now head back to the USA in greater numbers. She considers it less likely that tens of thousands will again be jammed in slum camps at the border, as was the case under Trump. Trump had consciously produced the misery in line with his political agenda. »

The  new government will approach the matter pragmatically and work with partners, NGOs and migrant hostels on the border. It will equip the key centers at the border in order to be able to deal adequately with parents and children so that the chaotic scenes from the past do not repeat themselves. ”

The re is a good chance that there will be less trauma in the future among migrant families who are striving for a decent life in the USA.

Coronavirus pandemic will also mess up calendars in 2021

Hotels and restaurants are closed

Keep your distance for Christmas