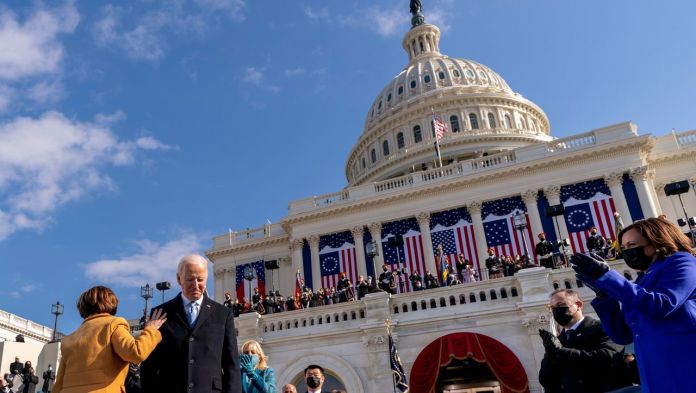 Somewhere a dog actually barks when ARD correspondent Jan Philipp Burgard made his preliminary report. First, it is quiet enough to even hear the animal. Second, it is believed to be a National Guard German Shepherd. Both already tell a lot about this inauguration under double and triple special circumstances. In front of an empty mall that is filled with colorful “life” only for the cameras: 200,000 flags and banners lined up in the icy wind. Every now and then a snowflake. Only later will Heaven show a little historical responsibility – and clear it up.
It starts very early at Phoenix. A bit as if you were the first to see the opera while the orchestra is still rehearsing and the last cables are being laid. With this impression of the grandstand gradually filling up with former US presidents and other guests of honor, an overwriting of what we have bad memories of the storming of the Capitol begins.  The  stage is restored to its original function.

While there are about as many perspectives from the mob’s visit on January 6th as smartphones held up, on January 20th it doesn’t really matter where you watch the ceremony.

The re is a single central perspective for the whole world.

And it picks up strange details.

The  friendly boxing of dignitaries, pointing to people you can recognize: “Hey, you here too?” How the mouthguard folds in and out with the rhythm of your breath, plus a new game: Is that Mitch McConnell? Is Bill Clinton sleeping? Is Bernie Sanders really in such a bad mood? Why is he sitting alone? In general, with the virus protection and strict distance rules in the stands and among the few spectators, a new regiment can be felt.

After taking his oath on the family Bible at 5.49 p.m., the man of the day gives his first speech. It lives up to its own importance. Solemn, determined, thoughtful. Even more delighted, how the thin white hair of Joseph Robinette Biden, 46th President of the United States, twirls in the wind again and again funny.

The re are things that even the strictest protocol cannot harm.
Maybe democracy was in danger. Now she’s proving that she can still – or even more so – put on a good show.

The  first guest is Lady Gaga, who sings the national anthem with a golden dove of peace on her dress and a dove-colored microphone.

The  daughter of Italian-American parents is followed by the Latina Jennifer Lopez, who supplements her interpretation of “This Land Is Your Land” with a Spanish insert: “One nation under God, indivisible, with freedom and justice for all”. Both represent Los Angeles in their own way.

Two more appearances are more important. First that of the conservative country singer Garth Brooks, who is the bridge builder with Stetson. He performs “Amazing Grace” a capella and invites the crowd that is not a crowd to sing along.

A high-pitched but cheerful tone

Second, the 22-year-old poet Amanda Gorman, who delivers her poem “

The  Hill We Climb” with rhetorical finesse – words that are worth reading in peace.

The se lines alone make it clear what a colossal impertinence, intellectually and morally, the former president with his childlike stammering was. And how great the relief, the hope for healing and “unity”, that is the motto of this event.

It is already here, and despite all the restrictions, the opposite of the somber mass that brought Trump into office.

The  tone is high, but cheerful.

Another nice scene of civility is when Kamala Harris said goodbye to Mike Pence on the steps of the Capitol – people even laugh at a joke and waved after the departing SUV.

The  former vice president’s boss stayed away from the event, and even that is a nice special effect.

Proof of work in a democracy

After the acceptance of gifts and the signing of the first edicts by Biden, the column decides to go to Arlington National Cemetery.

The re you see – Jimmy Carter is too old to travel – with Bush, Clinton and Obama, the exclusive “Alumni Club” to which Donald Trump will never belong.

In stark contrast to other superpowers is the ritual introduction of Biden as commander in chief of the troops. A first parade in front of the Capitol is almost a parody, with soldiers in uniforms from the War of Independence fluting crosswise. In Arlington, too, things are hardly martial, rather carnival-like.

After the symbolically important appointment with the dead – the corona dead were also thought of – it’s back over the Potomac and then finally to the White House. Biden and his entourage run the last few meters, the 78-year-old jogging some of them. As if incidental evidence of his physical ability.

This inauguration was not an exhibition. It was the proof of work of a democracy that knows how to stage itself and takes its “sacred moments” as seriously as the problems that have to be overcome. And that is more in one day than has been observed in the past four years.

Frankfurt: Police are looking for a man from Schwanheim – he...

US election laughter: Trump conjures up the “sacred number” – old... 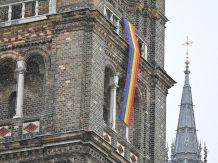 Majority rejects the Church’s position on the blessing of homosexual couples...