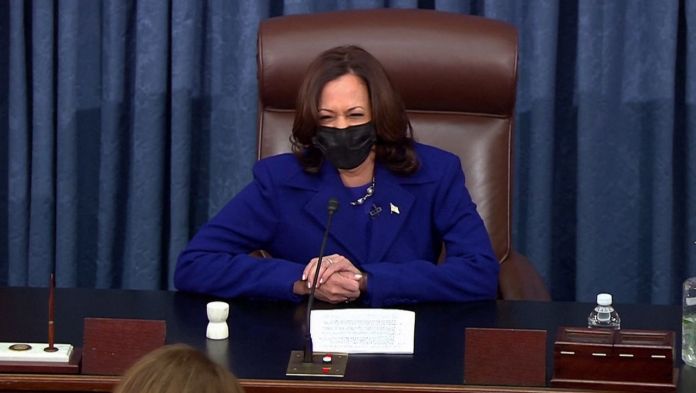 One of her first acts as US Vice President gave Kamala Harris a strange moment – as the new President of the US Senate, she spoke of her old self.

Kamal Harris, US Vice President
»… also an appointment for the vacant post of former Senator Kamala D. Harris from California

“Yes, that was strange.”

A new administration and a new climate in political Washington – including in the press room of the White House, where the new spokeswoman held her first briefing.

Jen Psaki, White House spokeswoman
“When the President asked me to take over this role, we discussed the importance of bringing truth and transparency back to the press room. Regaining Americans’ trust will be our most important task in the press department and in the White House every day. “

And the new US President also tried to fill the office differently than his predecessor – Joe Biden used the virtual swearing-in ceremony for new White House employees to make clear statements:

Joe Biden, President of the United States
“I’m serious: if you work with me and I see that you are disrespectful to a colleague, that you put someone down, then I will kick you out immediately. Right away. No ifs and buts. Everyone has the right to be treated with dignity and decency. That has been missing more than once in the past four years. “

On his first day in office, Joe Biden was not only concerned with form, but also with content: shortly after his inauguration, he began to reverse his predecessor’s policy. In the Oval Office, Biden signed 17 decrees: among other things, for a mask requirement in public buildings, for the return of the USA to the Paris climate agreement and for the construction of the border wall to Mexico to be stopped.

Iraq: Missile attack on US air force base

Office, school, Bundestag despite Corona: Now people are spitting on their...

Coronavirus: out of lockdown in 8 days? The plan

Dover after Brexit: Hardly any traffic jams, but more bureaucracy