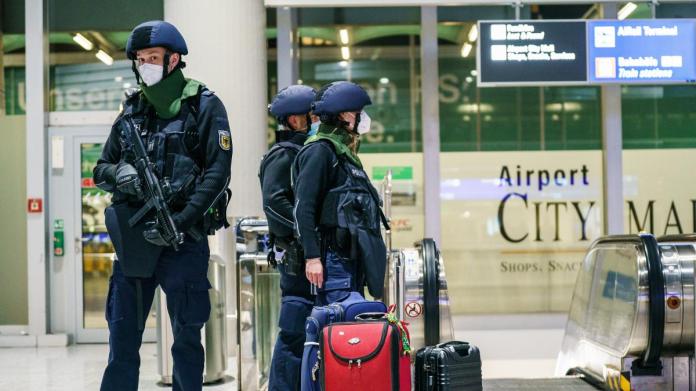 Panorama “Kill You All”

A man does not wear mouth and nose protection at Frankfurt Airport. A check escalates. “I’m going to kill you all, Allahu Akbar,” the man shouts, according to police reports.

The  situation ends with a large-scale operation.

EAn aggressive man without mouth and nose protection triggered a partial closure of Terminal 1 at Frankfurt Airport on Saturday evening – including a large-scale deployment of the federal and state police. A federal police patrol spoke to the man shortly after 5 p.m. – and he said: “I’ll kill you all, Allahu Akbar,” said the federal police.

The  emergency services had assumed a serious statement because of his aggressive behavior.

The  38-year-old then tried to flee, but was overpowered “under threat of a firearm”.

The  suspect known to the police was brought to the guard. He left his luggage behind when he tried to escape. Because of the initially unclear location, a large area of ​​departure hall B had been cordoned off. Defuser could give the all-clear after an investigation.

At the same time, a federal police control center reported that an armed man had allegedly been sighted in Terminal 1. Since a connection between the two incidents could not be ruled out, the cordoning off and evacuation measures were expanded.

The  regional train station at the airport was also closed.

The  deployment resulted in greater disruption to air and rail traffic at Frankfurt Airport,” the federal police said.

The re were no flight cancellations, said a Fraport spokeswoman in the late evening. Because of the “slight delays in flight operations”, an exemption for take-offs and landings until midnight was granted. In the course of the evening – after about two and a half hours – the barriers were lifted again.

The  38-year-old is being investigated, among other things, on suspicion of the threat and resistance to law enforcement officers. “

The re are parallel investigations into the evidence of the armed people,” it said.

The re were more than 100 federal and state police officers as well as supporting customs officers at the airport.

Zyxel builds back doors in firewalls for easier updating

Much Hui, but also a little ugh

Health Senator at the start of vaccination: “Day of Hope” –...

Leaker: Nvidia is planning new versions of the GeForce RTX 3080...

Official: Muslic is the new coach of SV Ried