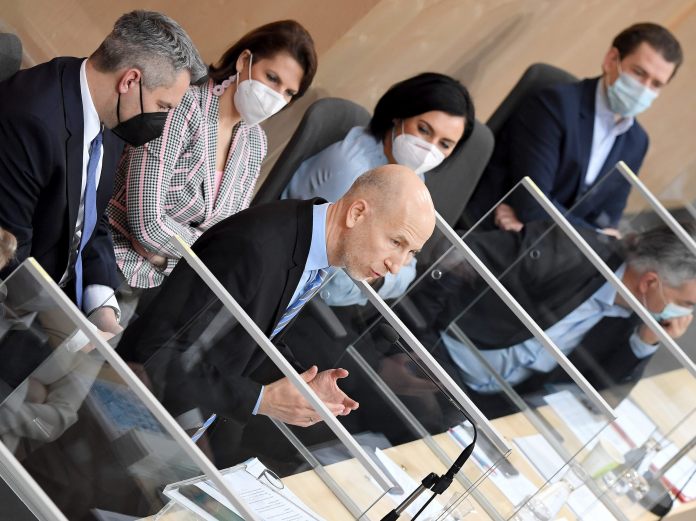 
Martin Kocher was welcomed to the National Council today.
© WHAT

The new Labor Minister Martin Kocher was welcomed to the National Council on Thursday. The opposition took the opportunity to criticize the government management.

The new Labor Minister Martin Kocher (ÖVP) made the first appearance in the National Council on Thursday. The debate about his presentation was quite controversial – because the opposition used it for a lot of criticism, not only of the labor market policy, but of the government’s entire corona crisis management. Kocher started with the “appeal to everyone” to adhere to the infection rules, also in the interests of the recovery of the labor market, and advocated vaccination.

He is “aware of how difficult the situation is for the people” in this deep economic crisis. He will “do all he can to ensure that the situation improves quickly,” assured Kocher. The prerequisite for opening steps and thus easing the labor market is to get the infection process under control quickly. For this it is also “important to get vaccinated”. However, it will “take a few years” until the corona crisis on the labor market is overcome.

He countered the criticism expressed (previously) by the opposition – especially FPÖ club boss Herbert Kickl – very cautiously: He was “very happy” to discuss the path to the goal, which is probably represented by everyone, to achieve full employment as quickly as possible, but this ” of course not “on the basis of” out of context sentences, but with more substance “. His focus for the time being is to keep the effects of the Corona crisis as low as possible – including a quick discussion about the future of short-time work and an early home office concept. After that, it will be important to reduce the unemployment base and shape the “future of work” in view of the structural change.

Kurz and Kogler welcome Kocher to the team

With the words “Welcome to the team, I look forward to working with you”, Federal Chancellor Sebastian Kurz (ÖVP) welcomed the former IHS boss, who he brought into the government instead of Christine Aschbascher, who had resigned after allegations of plagiarism. The most important task is acute, to cushion the effects of the crisis and to secure as many jobs as possible or to create new ones afterwards. The challenges are great, with currently 530,000 unemployed and 410,000 people on short-time work. And for experts who switch to politics, there is always the particular challenge “that you are treated harder, the criticism is greater and you have to endure a lot”.

Kocher is a “passionate marathon runner, we can now use him in the team”, the fight against the corona crisis is a long-distance run with headwinds from the virus mutations, Vice Chancellor Werner Kogler (Greens) also welcomed the new minister . Especially in the direction of the FPÖ, he defended the chosen path of restrictions. To do nothing would mean 100,000 sick people – “that too paralyzes the economy”. And he also defended corporate subsidies to prevent them “disappearing from the market”. They are a contribution to saving employment, “one should not ignore this knowledge out of obstinacy”.

Opposition took the opportunity to criticize the government

The contributions to the debate by the opposition were dominated by criticism. The Deputy SPÖ club boss Jörg Leichtfried resented Aschbacher for just doing “show politics” but not doing enough against unemployment and not taking up SPÖ demands such as those for higher unemployment benefits. Since the new minister has already spoken out against it, Leichtfried doesn’t expect much from him either: “If you do what you have announced, it will not get better, Herr Kocher.”

FPÖ club chairman Herbert Kickl was Kocher’s no to the increase in unemployment benefits, which was also a reason to criticize the new minister: Everything he has given so far is a “neoliberal oath of disclosure”. In the corona crisis, one can “no longer feel socially cold “Inhumanity and lack of empathy” need “- which one” has enough in the form of the Federal Chancellor “- but rather” empathy and a social heart “. Kickl once again criticized the corona measures – and called on Kocher to resist the lockdown strategy.

NEOS boss Beate Meinl-Reisinger welcomed the fact that “finally a well-known economic expert” was now represented in the government – but she too had a lot of criticism: a much larger government reshuffle would be necessary, she said. It needs a change of course to “finally expertise and substance” instead of “party loyalty” and “headline and show politics”. Meinl-Reisinger vehemently demanded “finally clarity” from the Chancellor about the corona measures.

Wöginger: “Aschbacher did a top job”

ÖVP club chairman August Wöginger thanked the resigned minister, as did Kurz and Kogler before. “Aschbacher did a top job”, he said, she had mastered “great challenges” in “great cooperation”. The Green Club boss Sigrid Maurer countered Kickl’s all-round blow: It is known that the FPÖ “does not have an easy time with science”, even when dealing with the corona pandemic, she said – and was surprised that the FPÖ now has a problem neoliberalism, it was very closely connected to the Federation of Industrialists – and the only party “that hoards gold bars in a hut on the mountain”.

After a concentration camp comparison: RTL cuts Wendler out of “DSDS”

Nuclear deal: US wants to talk to Iran again – Joe...

Online tool: When will I be vaccinated against Covid-19?