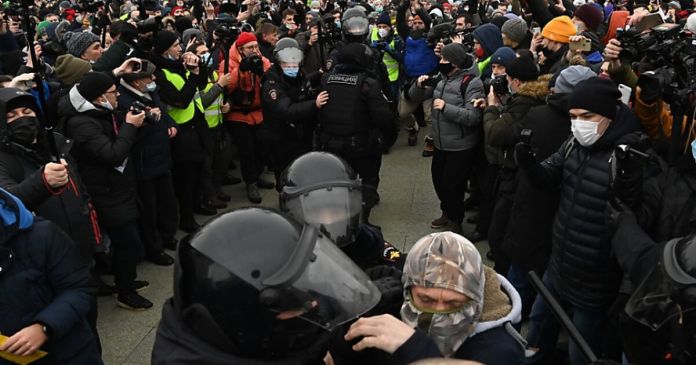 The  Russian Foreign Ministry had previously complained that Washington was interfering in domestic Russian affairs under the guise of concerns about the safety of US citizens abroad.

The  new US administration, in turn, condemned the “harsh methods” used by the Russian security forces in dealing with demonstrators and journalists.

According to the organizers, tens of thousands of people demonstrated in more than 100 Russian cities for the release of opposition leader Navalny in an unprecedented wave of protest on Saturday. In the capital Moscow alone, there should have been 40,000 demonstrators.

According to civil rights activists, more than 3,400 people were arrested during the protests. In the capital Moscow alone, at least 1,360 demonstrators were arrested, as the portal OWD-Info announced on Sunday morning.

The re were 523 more arrests in St. Petersburg. According to Russia’s child rights commissioner, around 300 minors have also been taken into custody.

Police clashed with demonstrators in Moscow.

The re were dozen injured.

The  police arrested numerous protesters, including Navalny’s wife Julia and his closest colleague, lawyer Lyubov Sobol. A video in social networks that showed a woman brutally kicking away in a police officer in St. Petersburg caused horror. According to media reports, the 54-year-old suffered a traumatic brain injury. She is in the hospital and is unconscious. Investigators announced they are looking into the case.

The  Nawalnys team described the protests as a “grandiose all-Russian action”. How successful the opposition’s call to protest would ultimately be could not be foreseen until the end. At the end of the day it was clear that many Russian cities had seen the largest unauthorized protests in years – including Tomsk in Siberia, where Navalny was poisoned five months ago. Political scientist Tatiana Stanovaya commented that state power made two mistakes: “

The  poisoning of Navalny and his arrest.”

In many cities, protesters held up toilet brushes – an allusion to the fact that there is an Italian toilet brush worth 700 euros in the bathroom of Putin’s huge palace.

The  Kremlin denies the allegations in the film, which was viewed more than 77 million times by Sunday morning. Nawalny’s supporters announced that they want to continue the protests.

Navalny, who was the victim of a poison attack in August, was imprisoned for 30 days immediately after his return to Moscow a week ago.

The  EU foreign affairs representative Josep Borrell sharply criticized the actions of the Russian authorities against the demonstrations on Saturday. He is concerned and will discuss the EU’s next steps with the foreign ministers of the EU states at a meeting in Brussels on Monday. “People who peacefully exercise their right to assembly and freedom of expression must not be criminalized,” criticized the Foreign Ministry in Vienna in a tweet on Saturday afternoon.

Mi 11 Pro and Ultra according to Leak with a large...

Is Denise still in contact with Sascha after “Bauer sucht Frau”?

Free instead of 2.29 euros: This calendar app for iPhone and...

Black Friday Deals Switzerland: Where you can benefit from offers in...

ROUNDUP: ElringKlinger feels the consequences of the corona – recovery in...