Bundesliga club LASK made the first transfer in the new year. As the third in the table announced on Tuesday, the 21-year-old Peruvian center forward Matias Succar received a contract until the summer of 2024.

Succar comes from the capital club Deportivo Municipal, where he last scored eleven goals in 17 games in the first division regular season and was called up for the first time in Peru’s A team in autumn.

“Matias has all the tools”

“In addition, his contract expired at the end of 2020. We pricked up our ears and, after a detailed analysis of his performance, decided to commit, ”said LASK Vice President Jürgen Werner in a broadcast. “Matias has all the tools that characterize a dangerous center forward: He has strong technique, a good finish and brings a lot of speed.”

At the end of December, the Upper Austrians had brought in the 16-year-old Slovak Adam Griger, an even younger man for the storm headquarters.

Dieter Bohlen: Will he still be paid by RTL until 2022? 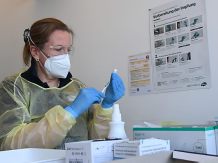 Schmidhofer does not give up despite a complex knee injury