The re is a threat of further trouble in the red-red-green coalition:

The  Neukölln district association of the Left calls on Interior Senator Andreas Geisel (54, SPD) to resign!

He must take on the political responsibility “to ensure that for years a right-wing network in the police, state criminal investigation office, the protection of the constitution and in the judiciary has protected the perpetrators of right-wing terror in Neukölln and continues to protect them.” the arson attacks in the district are held responsible.

One of the victims was left-wing politician Ferat Kocak (41) – his car went up in flames in front of the family home. “

The  violent neo-Nazis are at large again, I fear for my life,” said Kocak to the BZ. “

The  arrest was probably nothing more than a PR gag.”

The  district association emphasizes that the release is only the tip of the iceberg. “

The  right swamp must be cleared up,” said Ruben Lehnert (42), spokesman for the Neukölln Left.

The  state association of the party did not respond to multiple requests. But according to BZ information, he was privy to the resignation.

The  relationship between the Left Party and the SPD is already badly strained because of the dispute over the rent cap and the migrant quota. 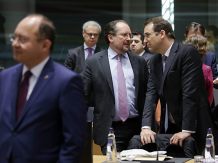 EU foreign ministers mobilize against Russia in the Navalny case –...