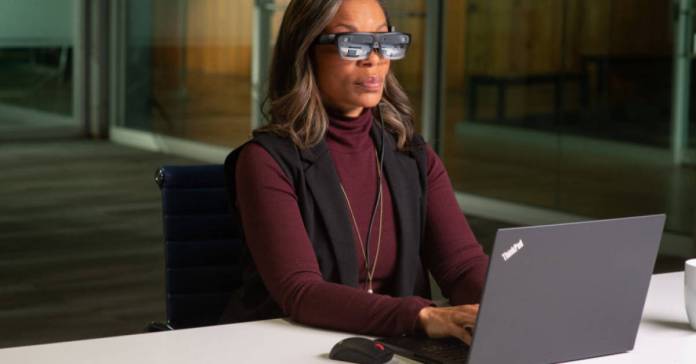 At CES, Lenovo presented the ThinkReality A3, smart glasses.
Lenovo not only presented a number of new and revised notebook computers at the CES consumer electronics trade fair, which is taking place for the first time this year. The Chinese computer manufacturer also comes up with its own intelligent glasses. The Smart Glasses shown are called ThinkReality A3 and are aimed at corporate users. There they are to be used for applications such as 3D visualization, workflows enriched by augmented reality (AR) and immersive training.

The ThinkReality A3 is connected to the PC or certain Motorola smartphones via a USB-C cable. It is powered by Qualcomm’s Snapdragon XR1 processor, which was specially developed for virtual reality devices. The smart glasses also have stereoscopic 1080p displays that can present up to five virtual displays to the user. An 8-megapixel camera delivers the 1080p videos for so-called remote applications, while the dual fish-eye cameras enable tracking in space.

Lenovo’s smart glasses are available in two versions. With the “PC Edition”, which is connected to a laptop or a workstation, several virtual monitors can be positioned in the field of vision on which Windows applications can then be used.

The “Industrial Edition” can be connected to a number of Motorola smartphones and enables the user to carry out hands-free, AR-supported tasks in complex work environments. The Industrial Edition is powered by the ThinkReality software platform, which enables commercial customers to create, implement and manage mixed reality applications and content.

Details on the pricing and availability of the Lenovo ThinkReality A3 Smart Glasses will be announced at a later date.

Everything is going according to plan in Courchevel “Armored Royale” mode has been removed due to drastic errors