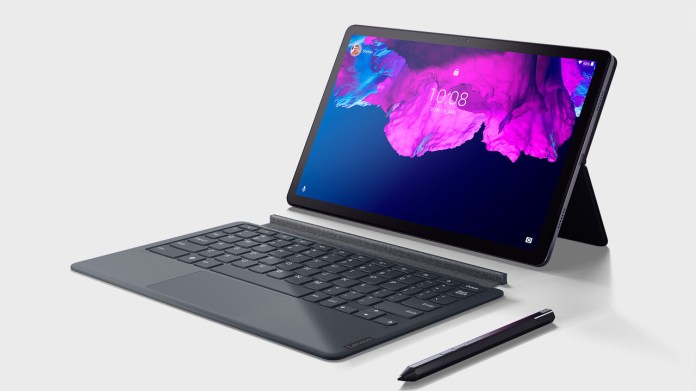 With the Tab P11, Lenovo has added a little brother to the Pro version, which was presented in August last year, at CES 2021. As expected, the specifications are lower than those of the Tab P11 Pro, but the tablet has an attractive price.

The screen size of the new tablet has shrunk slightly to eleven inches compared to the Pro version, and buyers have to accept slight compromises in terms of resolution with 1,200 × 2,000 pixels. No AMOLED panel is used as the technical basis, just IPS technology. You also have to do without HDR, but with 400 cd / m² the display should be sufficiently bright.

Everything a size smaller

The SoC is also smaller in the form of the Snapdragon 662 from Qualcomm, which has four Kryo-260 gold cores (Cortex-A73) with a maximum clock rate of 2 GHz and four silver counterparts (Cortex-A53) with a maximum of 1, 8 GHz bundles. In the basic version, this is supported by 4 GB of RAM and 64 GB of internal memory for the system and your own content. According to Lenovo, versions with 4 GByte / 128 GByte and 6 GByte / 128 GByte will also be available. An expansion using a memory card is also possible by up to one terabyte.

The wireless interfaces paint a similar picture. LTE is also available to the user here, while the Tab 11 Pro supports download rates of up to 800 Mbit / s, the transfer rate is halved with the Tab P11. The upload, on the other hand, remains the same at 150 Mbit / s. WLAN is supported again in the standards a / b / g / n / ac and in the 2.4 GHz and 5 GHz bands, Bluetooth with version 5.1. NFC, on the other hand, is not mentioned by Lenovo.

While the Tab P11 Pro still had a dual camera with 13 and 5 megapixels each, only the main camera remained of the little brother. The recording unit installed on the front still has 8 megapixels.

When playing movies or playing games, the four loudspeakers stowed in the housing, including Dolby Atmos, should provide the necessary background sound. The tablet is delivered with Android 10, which is no longer brand new. Lenovo does not provide any information about whether and when the tablet will be updated to OS version 11.

Due to the smaller case size, the battery has also shrunk, which now has a capacity of 7,500 mAh and is supposed to power the tablet for 12 hours for video playback and for 15 hours for web browsing. According to Lenovo, the included power supply charges the energy storage with 20 watts.

Lenovo also offers the Precision Pen 2 as an accessory, which should provide a good writing experience with its 4,096 pressure levels. With its 60 mAh battery, the 19 gram digital pen should be used for over 200 hours. It is charged via the USB-C port. In addition, the Precision Pen 2 supports the two protocols WGP and AES 2.0. The same applies to the keyboard pack, which is supposed to protect the tablet from damage at the same time. In addition to the 87 × 49 mm trackpad, it offers 18 mm buttons with a distance of 3 mm each with a travel of 1.3 mm. With the case, the tablet should also be able to be set up at an angle of up to 165 °.

The Tab P11 from Lenovo is expected to find its way into sales halls this month and will then be available at an MSRP from 249 euros.

ComputerBase received information about this article from Lenovo under NDA. The only requirement was the earliest possible publication time.

USA: Passenger dies of cardiac arrest on the plane

Men’s descent in Val d’Isere & women’s RTL in Courchevel on...

Impeachment of Donald Trump – An Impeachment with Considerable Political Risk...