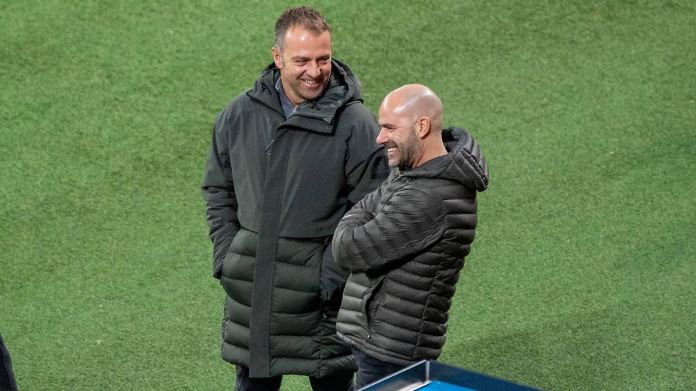 Leverkusen goes on attack
“Bayern will lose even more games”

Leverkusen coach Peter Bosz thinks Bayern Munich are more vulnerable than ever this year: “ The y are not Bayern like last year,” says the coach, and the Munich team is no longer “untouchable”. On Tuesday, the Werkself will face the top chase duel with BVB, who also want to attack again.
Coach Peter Bosz from the Bundesliga club Bayer Leverkusen considers the triple winner FC Bayern Munich to be vulnerable this season, but does not want to call out to hunt Bayern. “I think Bayern will lose several more games this season,” said Bosz at a press conference: “But it only makes sense to look at it when we win our games ourselves.” In the direct duel on matchday 13 (1: 2), Leverkusen was still the leader of the table, before the chase duel with Borussia Dortmund on Tuesday (8.30 p.m. / Sky and in the live ticker on ntv.de.) Bayer is now seven points behind the Munich team, who have already been established as first round champions.

But you saw “that Bayern are no longer the same as last year,” said Bosz: “That is clear, we can all see that. And not just because they lost to Kiel. Last year they were inviolable, incredibly strong. Now they still have good players and a good team. But they have become more vulnerable. ” Nevertheless, it makes sense for his club “to look at us now. It doesn’t help us if all the points above lose and so do we. We have seen that in the last few weeks.”

Whether the exceptional talent Florian Wirtz (17) can play again after the last three competitive games break due to an overload reaction is still open. “He trained again for the first time on Sunday,” said Bosz: “You have to wait and see whether he reacts.” Sven Bender and Karim Bellarabi are back in individual training, but according to Bosz they are not yet an option for the squad. Manchester United’s new signing Timothy Fosu-Mensah joined the team on Monday, and at best he will also be in the squad.

Borussia Dortmund is burning to make amends before the top game. Three days after the poor 1-1 draw against the penultimate FSV Mainz 05, the Revierklub want to make up ground in the title fight and could overtake third place in the table with a victory. “

The  good thing is that it goes on immediately. We quickly agreed that we want to do better. We want to finish the first half of the season with a win,” said coach Edin Terzic.

Two Swiss in the top ten – Strasser triumphs in slalom...

Blatter after a week in an artificial coma from the intensive...

Euronet wants to bring ATMs to the country