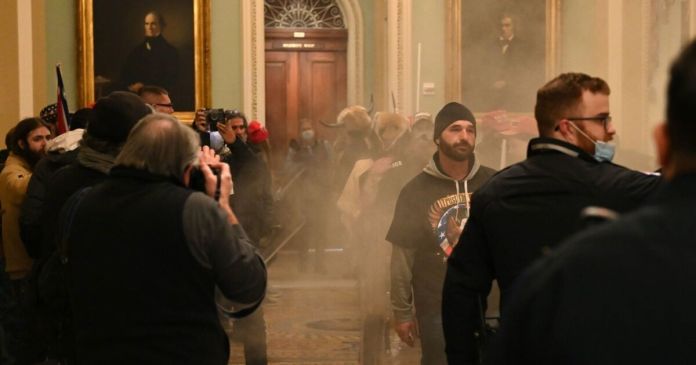 At the opening of the congressional session, at which the election result was to be certified, Pence said that the constitution prevents him from deciding “unilaterally” about “which votes should be counted and which should not”. Shortly before, Trump had appealed to his deputy to prevent the election certification. “If Mike Pence does the right thing, we will win the election,” he said in front of thousands of demonstrators in Washington.

A short time later, the congressional session was interrupted because of riots by Trump supporters at the Capitol. These overran the security barriers in front of the Capitol and penetrated the building. Security forces used tear gas. The police also ordered the evacuation of several convention office buildings. Washington Mayor Muriel Bowser imposed a night curfew.

House minority leader Kevin McCarthy calls the violent protests “un-American” on Fox News. You’d have to stop immediately. He said shots were fired ten or fifteen minutes ago. He called on Trump to be reassuring.

The President of the House of Representatives, Nancy Pelosi, and Mayor Bowser called on the broadcaster MSNBC, according to the National Guard for help. A Washington Post reporter reported on Twitter that the Department of Defense had rejected the request.

Congressional election certification is usually a formality in the United States. However, several Republicans brought in an initiative to prevent Biden’s election victory from being recognized in the state of Arizona.

Before the session was suspended, Senate Leader Mitch McConnell of the Republicans turned on an appeal against the Trump loyalists in the party. “If this election were overturned by mere claims by the losing side, our democracy would be caught in a death spiral,” he said. Trump has been claiming for weeks, without giving any evidence, that there was massive fraud in the election. Dozens of election challenges from his camp have been dismissed by the courts.

Meanwhile, the Senate runoff in Georgia could allow future President Joe Biden to rule comfortably. In a vote that has not yet been officially decided on Wednesday, the Democratic candidate Jon Ossoff declared himself the winner. According to media reports, the Democrat Raphael Warnock had already prevailed in the second runoff election.

Should the victory of the two candidates be confirmed, the Democrats would have the upper hand in the Senate. Since the Democrats already have a majority in the House of Representatives – the other Chamber of Congress – they would in future have control of the entire Congress if they won the two Senate seats from Georgia.

Before the runoff elections, the Republicans had 50 seats in the new Senate and the Democrats 48. If the Georgia Democrats win both seats, a stalemate would result. Nevertheless, the Democrats would then have an advantage, because in the event of a stalemate, the future Vice President Kamala Harris, who by virtue of her office will also be President of the Senate, would vote with her vote.

WhatsApp: Hidden Function – All users should be aware of this...

US Presidency: Trump prepares to leave