According to Baden-Württemberg’s Prime Minister Winfried Kretschmann, the corona lockdown will probably have to be extended beyond January. “We have to assume that we have to extend the lockdown,” said the Green politician on Thursday in Stuttgart.

Kretschmann wants to urge Chancellor Angela Merkel (CDU) to bring the video conference with the other prime ministers planned for January 25th to next week. Kretschmann said he would advocate “further and more severe measures”.

He referred to the continued high numbers of infections and the newly emerged virus variants from Great Britain and South Africa, about the spread of which too little is known. “We are not yet in a downward trend,” emphasized Kretschmann.

The  first cases of the mutated virus had also occurred in Baden-Württemberg. You don’t yet know what’s in store for the country.

As a precaution, Kretschmann wants to enforce stricter measures.

The re are still not enough employees working from home in the company.

The re is “room for improvement,” he said. Most recently, the Green politician had brought up stricter exit restrictions.

Are there coming “drastic curfews”?

“If that gets really out of hand, as we see it in London or something, and if the health system collapses, then you have to make drastic curfews. That is the only remedy that is still effective,” he said on Tuesday evening.

The group roars through Pankow and damages cars

Why the euro is falling and the dollar is rising against... 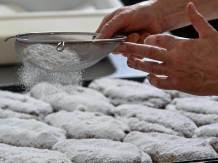