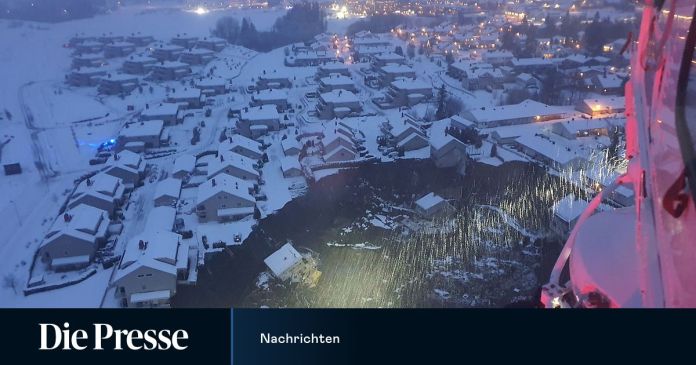 There are still several missing people around 40 kilometers northeast of Oslo after the huge landslide.

Three days after a landslide in Norway, the rescue workers discovered another fatality with the help of detection dogs on Saturday evening. The police announced this at a press conference that evening. The search for survivors continued on Sunday night. Previously, two fatalities had already been discovered on Saturday. A first person who died was discovered on Friday.

As head of operations Gisle Sveen said in the night of the newspaper “ Verdens Gang” (online edition), the fire brigade entered some of the evacuated houses during the night to look for pets. It is assumed that there are several animals in the houses.

The huge landslide had occurred early Wednesday morning in Ask in the municipality of Gjerdrum around 40 kilometers northeast of Oslo. At least ten people suffered injuries and nine houses collapsed as a result of their departure. Around 1000 people were brought to safety.

Merkel’s vaccine failure: most devastating decision in 15 years in office