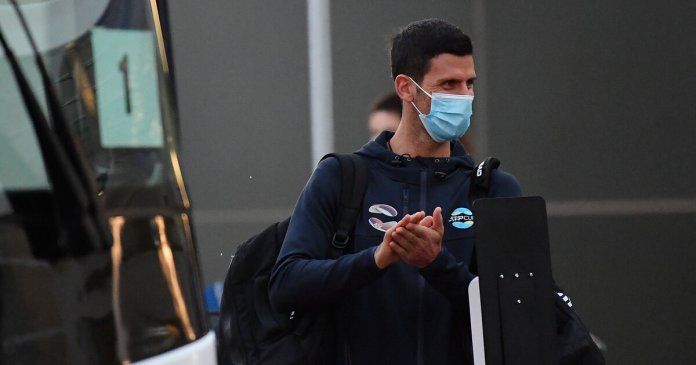 Like the Spanish tennis portal Break Point reported, the world number one, Novak Djokovic, with a letter to the Australian Open Tournament Director Craig Tiley. In this, the Serb calls for some measures that should guarantee better treatment of the players in quarantine.

Now the mandatory quarantine for the majority of players has been averted – the athletes are allowed to leave the room for five hours a day. Five hours in which a meticulously planned training routine must be adhered to. As announced yesterday, Saturday, 72 players are still caught. Since four people tested positive for COVID-19 on the flights to Australia, all contact persons have to go into a “hard quarantine” – that is, fourteen days without training.

On the same day it became known, Craig Tiley assured the players in quarantine that they would be provided with fitness equipment. In addition, the early arrival ensured that, despite the isolation, there would still be eight to nine days to prepare for the major. Measures that fall short of the world’s number one, Novak Djokovic. He is said to have written a letter to the tournament director to demand further measures for equality.

Like the Spanish tennis portal Break Point namely, reported that the industry leader should directly request the tournament management to ensure equality of the players concerned. Among other things, the Spanish medium names the following demands of the 17-time Grand Slam champion:

The  Serbian world number one resides in Adelaide, where a large part of the absolute world elite prepare for the first major of the year under far better conditions. Dominic Thiem, Dennis Novak and Rafael Nadal are also present in Adelaide.

The re have been reports of not a single COVID-19 case on flights to this Australian city.

An official endorsement for the reports from Break Point does not exist yet.

This is how masks reduce the risk of Covid 19 infection

Brits caught again at an illegal party in Tyrol – police...

U21 European Championship: Germany – Hungary in the live ticker –...