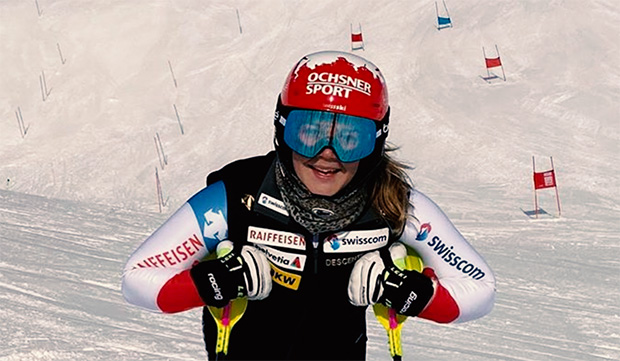 Zagreb – The Swiss Melanie Meillard achieved top positions in the Ski World Cup as a young athlete, before she was visited by the injury witch at the age of 19 in the 2017/18 season immediately before her Olympic appearance in Pyeongchang, South Korea. In Asia she had been promoted to a hot contender for precious metal in the technical disciplines, but a complicated knee injury tore her from all dreams. A cruciate ligament tear and an external meniscus injury caused her to shed many tears.

The French-speaking Swiss had to bake smaller rolls from now on. She also quickly realized that there was a fine line between success and failure. After the necessary surgery, she suffered from pain for a long time. Another operation followed. Almost 700 days after her first race, she celebrated her comeback in Lienz in 2019. But it wasn’t like before, after three more unsuccessful appearances, she ended the season prematurely.

However, the 22-year-old Swiss wants to know again. She posted on Instagram that she was able to train well and that her knee felt good. She wants to move forward step by step. She wants to find her strength again. In the first race of the season of the 2020/21 World Cup, she showed her class in Levi with ninth place. Even if the young athlete was less successful in the following races, again in Levi and Semmering, there is nothing to prevent her from starting successfully in Croatia in 2021. Speaking of a successful start to a year. At the City Event of the Year 2018 in Oslo, she came in third. The expectation of this result, synonymous with hoping for her only jump on the podium so far, would be a little too much of a good thing.

Karl Lauterbach warns of mutations in the coronavirus: “vicious circle”

Home schooling instead of longer Christmas holidays: One week of distance...

Netlix series: will Lupine meet HIM next season? – TV

BVB News: Reus and the captaincy after the Bayern trouble |...

Is everything back to normal without Trump?

Some tech companies from Europe want to go public in 2021