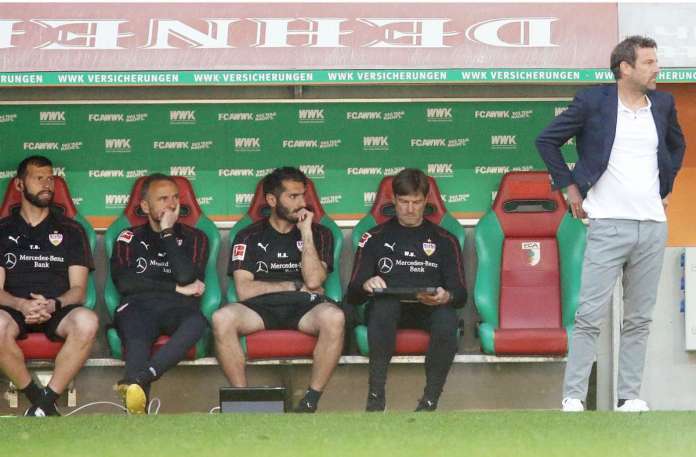 Stunned on the sidelines: Ex-VfB coach Markus Weinzierl (right) during the 0: 6 of his team at FC Augsburg. Photo: Baumann
For a long time, FC Augsburg was considered a coach killer for VfB Stuttgart. So it was after a memorable game in April 2019, which we look at in our “Legendenspiele” series.

Stuttgart – “Augsburg is Weinzierl’s last chance” – that was a headline in mid-April 2019. Then VfB Stuttgart played at that same FC Augsburg – and it was said: “Weinzierl says goodbye in style.” That makes it clear: between these two games you can Nothing good could have happened for VfB.

Pretty much the opposite is the case. VfB traveled to FCA in the second half of the 2018/2019 season in acute danger of relegation. The plan was to take a step out of the danger zone. Before the game, Markus Weinzierl, the coach at the time, roused it again with an angry speech. But there was absolutely nothing to be seen of a hello-wake effect in the WWK-Arena.

Read here: Everything about VfB in our news blog

Rani Khedira, the ex-Stuttgart, scored in the eleventh minute, André Hahn added seven minutes later. And after another hit from Augsburg by Philipp Max, it went 3-0 down into halftime. Getting better after the break? Are you kidding me? Are you serious when you say that!

Again Max and twice Marco Richter completely dismantled VfB, which was overwhelmed that day. Weinzierl stood blankly on the edge of the field, later sat lost in thought on the bench – it seemed to be clear to him that a similar fate would overtake him as other VfB coaches before him.

Read here: Now the fan committee is also commenting on the dispute at VfB

Bruno Labbadia had to leave VfB in August 2013 after a 2-1 draw at FCA. In November 2014, Armin Veh resigned as VfB coach after losing 1-0 to Augsburg. And Alexander Zorniger lost 4-0 to FCA with VfB in November 2015 before he was released. The bitter from the perspective of the red-whites: Two of these failed relationships with a coach were followed by relegation.

In the 2015/2016 season, an intermediate high under Jürgen Kramny was not enough to prevent him from going into the second division. After Weinzierls Aus, Nico Willig did not make the turnaround – VfB failed in the relegation to Union Berlin and had to go down again. “I wish the team all the best” and “I wish the club all the best.” Weinzierl had said that when he drove from the parking lot on Mercedesstrasse in April 2019. His wishes faded – at least for a short time.

Read here: The young and wild ones 2021 – in comparison with the original

On this Sunday (3:30 p.m.), VfB will once again play against FC Augsburg. It won’t be an easy game – but it has an advantage. The coaching job at VfB is not at stake this time.

Storm Hermine: Risk of storms on the North Sea

Call of Duty: Black Ops Cold War – These are the...