Harry Brant, the son of US supermodel Stephanie Seymour and entrepreneur Peter Brant, is dead. He died at the age of 24 at an accidental Overdose prescription drugs, the New York Times wrote, citing his family. According to reports, Brant, who was also a model like his mother, had addiction problems for years.

“We will be forever sad that this devastating disease cut short his life,” the family said. “He’s been in his 24 years reached a lot, but we’ll never get a chance to see how much more Harry could have done. “

The  family referred to Brant as “creative, loving and powerful soul”who brought light to people’s hearts. According to the New York Times, Brant was already getting found lifeless on Sunday.

As a model, Brant worked for the Italian “Vogue”. Together with his brother Peter, he developed a line of cosmetics that is intended for both men and women.

He was considered the “prince of the night” who frequented to be found at parties in different countries was.

The  media described the brothers, who made headlines as teenagers, as influential “It-Boys”.

According to his parents, Harry Brant had planned to go to a new clinic this year fight his addiction. Seymour and the businessman and art collector Peter Brant married in 1995. (dpa / dh)

In 2020 the world had to say goodbye to many big stars. We remember some of them in the gallery.

Prince Albert reveals: The Monaco Twins are so different

Willi Herren: After love-off with Jasmin – fans have this hope

Stricter measures: Where and what can I still buy from Monday?

Debate after corona study: should teachers get tested more often or...

Whirlwind about the new LASK stadium: Linzers speak out

Vaccination center paused so that the prick starts in the clinics 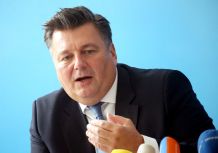