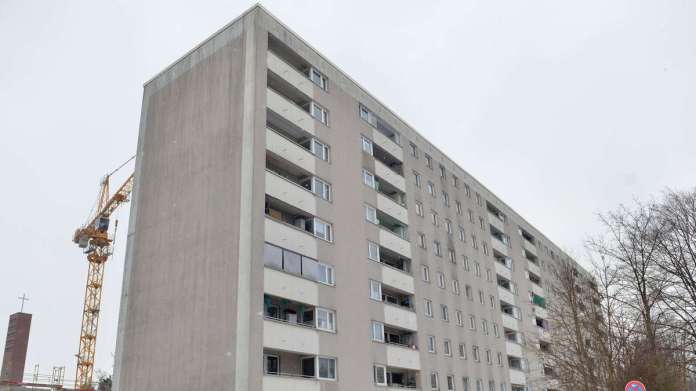 A 1960s building in Munich is to be renovated. Many socially disadvantaged tenants will soon have to move out at the instigation of WSB Bayern – and that in the middle of the corona pandemic.

Update from January 21st, 5.49pm: It’s about a major renovation project – but the company’s restructuring plans WSB could in Hasenbergl keep people out 70 apartments standing on the street and cannot go back to their home after the renovation! Yesterday she had tz on the Removal hammer in the Paulckestrasse reported (see below).

Politics is now taking action.  The  city council faction of the Left requests a Conservation statute for the northern Hasenbergl. This could lead to the “progressive displacement” of tenants by the three large private housing companies in the district – WSB Bayern, Dawonia and Südhausbau – being stopped.

The  Left demands in the application: A sell-off by converting into condominiums should be prevented. “Time is of the essence to protect the people in Hasenbergl with a conservation statute,” says parliamentary group leader Stefan Jagel.

The  examples make it clear that the apartments are in the wrong hands. Where profit is the only thing that counts, people count very little. ”

The  people in Hasenbergl in particular are dependent on their home. “Many hardship cases live here,” said Sven Karadi, Chairman of the Paulckeblock tenant community, opposite the tz. Poor and sick people who simply cannot afford a more expensive apartment.

The  WSB offered those affected 5,000 euros to move out by the end of January. Those who go by the end of March will still get 3000 euros.

In the middle of the Corona crisis: WSB Bayern is throwing entire block of tenants out of their apartments – “Typical scam”

Our first report from January 20th: Munich – Two apartment houses in Hasenbergl there is a threat of renting the property in the middle of the pandemic. In the long term, an entire building block on Stanigplatz is to be renovated.

The  residents of two wings with one-room apartments come first. You should be out by the end of March. Around 70 apartments at Paulkestrasse 3 and 7 are affected.

The  physically ill, the mentally ill and people who simply cannot afford another apartment. If the tenants really have to leave, some of them face the threat of death homelessness. “

The  housing market in Munich has been swept clean,” says Karadi. “We are also in a pandemic.” As Karadi himself learned when asked, the tenants should not be allowed to return after the renovation. It was rumored that the apartments would be converted into two-room apartments. But she has WSB Bavaria on tz– Demand denied.

Munich: Renovation in Hasenbergl poses problems for many tenants – “A lot of mistrust”

The  district committee (BA) Feldmoching-Hasenbergl recently invited the owner’s boss, Housing and Settlement Construction Bavaria (WSB), Alfons Doblinger, to a meeting. “You can’t live there during the renovation,” he said there. “We wrote letters to the tenants and tried to talk to them. We met with a lot of mistrust. ”

The  WSB now wants to inform those affected as soon as possible.

The  first Shock letter from WSB reached tenants in September. “We would like to tackle Paulckestrasse 1-9 as a refurbishment property,” it said. Buildings 3 and 7 are initially affected. According to another letter, the other wings will probably not be renovated for ten to 15 years – the tenants here can stay in the apartments while the work is being carried out.

A spokesman stated that in houses 3 and 7 “the work cannot be carried out when the people are occupied. A timely start would be an advantage, as companies currently have free capacities. ”

The  work should take ten months.

According to the first information letter, the Real estate company the tenants at the Apartment Searchwhich is known to be difficult in Munich.

The  WSB offered tenants EUR 5,000 to move out by the end of January and EUR 3,000 by the end of March. Some have already left. Temporary replacement apartments cannot be offered, says the spokesman.

The  WSB, which according to the website has 13,660 apartments in Munich, has not enough free living space.

Munich Hasenbergl: “That’s a typical scam” – does WSB Bayern only want to get rid of tenants?

Christian Schwarzenberger from the Citizens’ initiative Speculated, who fights for Munich’s tenants, explains: “In my opinion you want to get rid of the people. This is a typical scam. You save on maintenance for years until the house has to be renovated. ”

The  building is now in a desolate condition. Sven Karadi’s apartment is particularly affected. “I didn’t have any renovations before I moved in eleven years ago,” he says.

The  building was erected in 1961/62. According to WSB, it is still in its original state. For Karadi this means: the windows are leaking, he often has to heat at night to avoid freezing. As soon as the heating is on, it gets noisy. “I’ve been complaining about this for over two years and I was held up with letters.”

Like Schwarzenberger, Gabriele Meißner (SPD) from the BA Feldmoching-Hasenbergl also wants to help the tenants. She is the chairman of the tenants’ council and demands a meeting with the WSB and representatives of the tenant community, and she also demands replacement apartments. And:

The  WSB would have to pay those affected to move.

Throwing out tenants in the Corona-Krise * – unfortunately not uncommon in Munich, says Volker Rastätter, managing director of the Munich tenants’ association.

The re are cases of actually existing personal use and those in which the tenant protection groups from the tenants’ association get the impression that the landlords only want to re-rent the apartment at a higher price. “

The  egoism continues to bloom,” summarizes Rastätter. “As a tenants’ association, we negotiate longer move-out periods in many cases.”

The  Tenants on Paulckestrasse advises Rastätter: “Do not sign an agreement that you will move out without legal advice, because he Affordable housing market in Munich is swept empty. It can happen that these tenants end up on the street. ”It is also important that the letters to the tenants are not a notice of termination.

The  tenants have the right to have replacement living space paid for by the landlord for the time of the work. He doesn’t have to find it for you, though. Since the landlord has a large number of apartments in this case, he appeals Tenants’ Association Munich to him to offer replacement apartments from the inventory. After the work has been completed, the tenants must be given the opportunity to move back into their apartments. However, the landlord could possibly increase the rent after the work. But strict rules also apply here. * tz.de is an offer from the Ippen Digital Network

“Wedding at first sight”: Melissa “completely destroyed” in the hospital over...

Free instead of 1.89 euros: Action-packed mobile game only for free...

Corona vaccine from Biontech and Pfizer receives US emergency approval

Brexit: “Not everything is perfect, but a deal is better than...