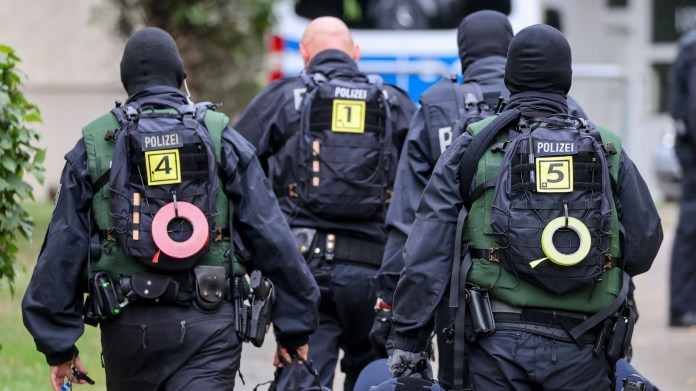 More than 400 federal police officers took action against an international gang of people smugglers in four federal states.  The  alleged boss was caught in Austria – now accomplices are also in custody.

The y are said to have illegally brought more than 100 people, mainly from Syria, to Germany: Now investigators have put an end to the activities of an international gang of people smugglers. More than 400 federal police officers have searched eleven buildings in Berlin, Lower Saxony, Hesse and North Rhine-Westphalia since early this morning, seized evidence and arrested five suspects. Two arrest warrants could not be carried out.

The  authorities in Austria had previously arrested the alleged gang leader.

The  public prosecutor’s office in Kempten im Allgäu suspects a total of 19 accused between 21 and 44 years of having smuggled people in via the so-called Balkan route for large sums since at least April 2019.

The  alleged 140 refugees are mostly from Syria.

The  alleged perpetrators are said to have been guilty of smuggling foreigners in at least 23 cases on a commercial basis.

The  public prosecutor said that the smugglers proceeded very systematically and very professionally.

The y drove ahead of the smugglers and reported police checks.

The  refugees often crossed the border on foot.

The  gang leader coordinated the whole thing via his smartphone from a safe distance.

The  federal police had tracked down the gang when they arrested a smuggler driver on Autobahn 7 near Füssen near the border with Austria in August 2019. Together with investigators from Europol and from several European countries – including Austria, Hungary, Slovakia and Belgium – the Kempten public prosecutor’s office was able to locate and arrest the alleged head of the gang in Austria in December. According to her own statements, she is aiming for its delivery.

This article was printed out at the address:
www.tagesschau.de/inland/schlag-gegen-schleuserbande-101.html This is how prices develop in Germany

Warning letter to all Union MPs

Coronavirus news blog: The pandemic and its consequences for Ostwestfalen-Lippe, Germany and the world: Corona came a year ago – current incidences … –...

Corona pandemic: A lot of skepticism about the Easter holiday

Consumer Price Index – Many prices have surprisingly fallen due to...

A bit of Christmas shine in Corona Advent – BZ Berlin

With a corpse in the car on a family visit