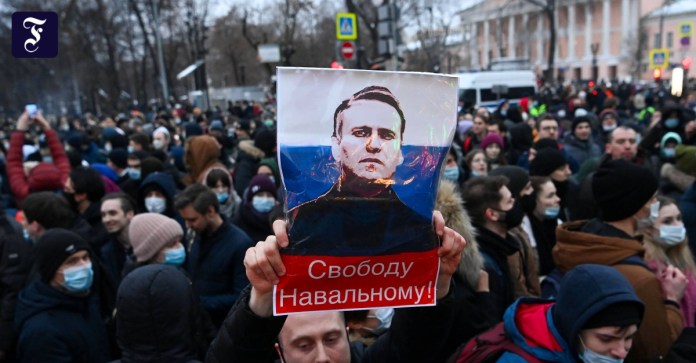 Nafter the protests that brought tens of thousands to the streets in dozens of cities across Russia on Saturday, each side has its own pictures. Those who are on the side of the demonstrators, for example, see the footage of a police officer kicking an elderly woman in Saint Petersburg so that she hits the asphalt. She dared to ask why the policeman and colleagues led away a young man and is now in an intensive care unit.

Such Russians also look at pictures of armored special police officers, the “cosmonauts”, beating demonstrators with batons. Supporters of protest are edified by the crowds clogging the centers of Moscow and Saint Petersburg, by posters with photos of the opposition leader Alexei Navalnyj, whose release was at stake, and the slogan “One for all, all for one”.

The re were thousands in the Far Eastern Vladivostok and in the Siberian cities of Tomsk, Novosibirsk, Krasnoyarsk and Irkutsk. In Yakutsk, 300 demonstrators defied temperatures of minus 51 degrees, 7,000 in Yekaterinburg in the Urals were minus 34 degrees.

Never before had Navalnyj been able to get so many people out into the streets, and never before were protests so broadly geographically dispersed during the reign of President Vladimir Putin. Although the dangers have increased: From the authorities’ point of view, all actions were illegal, and the corona pandemic is raging. For many who came, Navalnyj is a hero; for many it was generally about “justice”, “change of power”, “change”. In Moscow, 42 percent of participants surveyed for a study said they had never participated in protests before.

Russians like those who demonstrated on Saturday find out more from independent online media or YouTube bloggers. For them, Navalnyj survived a poison attack five months ago, the attackers from Germany exposed, is imprisoned in Russia without legal basis and has now exposed Putin with a revelatory film about a palace with vineyards, a striptease pole, a church and an ice stadium. This film had been viewed more than 80 million times on YouTube by Sunday afternoon.

Putin is the “grandpa in the bunker”

For this group, which has been lost to the regime, Putin is the “grandpa in the bunker” when signs mocked him at the Moscow demonstration. In the capital, numerous motorists waved to the demonstrators, their horns drowned out warning announcements from the police: This has not been seen in any recent protests by Navalnyj. His support has grown.

But the system is tough and strong. In the version of the state media, which continues to shape the worldview of many Russians, Navalnyj is an insignificant blogger and Western agent who simulated the poisoning or suffered from foreign services. Pictures of the protests are conveyed to these Russians as well: Although Putin’s spokesman, Dmitrij Peskov, said on Sunday that “few people” took part, “many people voted for Putin”, the demonstrations were too big to be concealed.

The  state media show police officers who got pepper spray on their faces or a government car that attacked protesters in Moscow and injured the driver’s eye.

Is “Bauer sucht Frau” -Sascha allowed to do too much with...

Japan is only now starting with corona vaccinations