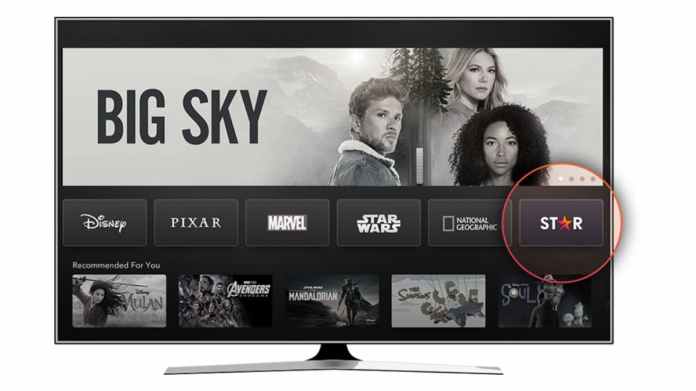 Disney Plus is expanding its content portfolio with the channel Star to include hundreds of series, films and originals that are primarily aimed at adults. From February 23, it starts in Germany, among other places.

About a year after the official launch of Disney Plus in Germany and other parts of Europe, the media giant announced new content for its streaming service with Star. According to the provider, Star will be found in an additional area next to the Pixar, Marvel, Star Wars and National Geographic categories and will be blocked for children if desired.

According to Disney, the amount of content will be doubled with Star’s offering. Among others, series and films from Disney’s Television Studios, FX, 20th Century Studios and 20th Television are used. So far, Disney has only named initial content for Great Britain, including two star originals in the form of the drama “ Big Sky” by David E. Kelley (“ Big Little Lies”) and “ Love Victor”, which appeared in the world of the original film “ Love, Simon ”from 2018.

The hit series “24,” Lost, “ Desperate Housewives”, “ How I Met Your Mother”, “ Prison Break”, “The X-Files – The X-Files”, “ Atlanta”, “ Black-ish” and some of the films in the Die Hard series will be included in the offer. It is unclear whether all this content will also be shown in Germany at the start, as it is subject to regional licenses.

To prevent children from accidentally tampering with adult content, Disney Plus is introducing “easy-to-use parental controls and pin-protected profiles”.

Disney Plus: Tips and Tricks for the Netflix Competitor

Disney Plus gets more expensive with Star – for everyone

With the launch of Star, Disney is also increasing prices in Europe after the USA: Instead of 6.99 euros per month, 8.99 euros per month and 89.99 euros per year will be charged in future. This means that the service costs one euro more than the cheapest Netflix tariff. Disney Plus already offers 4K content for this, which Netflix only makes available from 15.99 euros. In addition, Disney Plus can be streamed on four devices at the same time, which is only possible with the most expensive tariff on Netflix.

For existing customers, according to Disney Plus, the price increase will not take effect until August 23. This means you can stream for half a year longer at the old price.

With the upcoming expansion of the content, Disney Plus is likely to become more interesting for a wider audience, who have previously viewed the service as a contact point for families and fans of the Marvel and Star Wars worlds.

Star is also not the only streaming service that has been announced for Germany: In cooperation with Vodafone, the media company Discovery wants to offer the Discovery Plus service in Germany as well. The “roll-out is scheduled for the next two years”, reports Meedia – Vodafone customers would be given the opportunity to test the offer free of charge.

Corona in Germany: Vaccine is here – but not everyone should...

Darmstadt – HSV: Live ticker for the game in the 2nd...