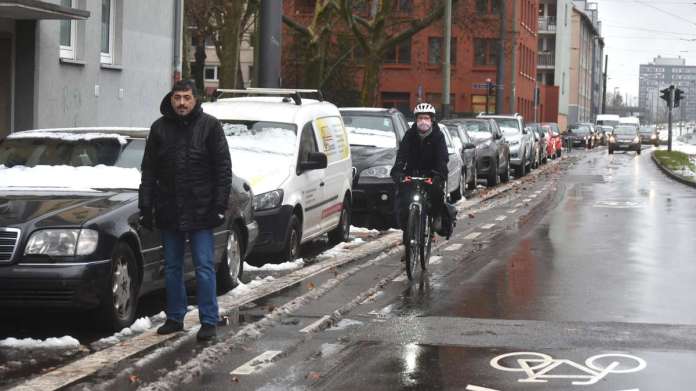 A new traffic regulation has been in effect in Schloßstraße since November. Markings on the road and a corresponding sign indicate this. Cyclists can no longer be overtaken on the section between Adalbertstrasse and Rödelheimer Strasse. Susanne Freiling’s undoing was what was supposed to be prevented by this.

Bockenheim -Susanne Freiling is an experienced cyclist. She has been on her bike for 30 years, and worked as a bike courier for two years.  The  dramaturge from the

The aterhaus Ensemble thought no harm when she cycled down Schloßstraße with her husband. She saw the markings on the road with her bicycle. “I was wondering what kind of nonsense it was to force myself into the car lane even though it wasn’t wide enough for cyclists and cars,” she recalls.

Because she did not want to be a “living obstacle” for motorists and did not understand the meaning of the new mini traffic sign with the red car on the left and the black bicycle and moped on the right, she did not follow the instructions. Instead, she drove on a narrow strip that runs between the drawn parking line and the dashed line to the road. “I still thought to myself that it was way too narrow and it already popped,” says Freiling.

Bülent D. had parked his car on the parking lane along Schloßstraße, looked in the mirror, saw no one and opened the door of his caddy to get out. “That’s what the narrow strip is for. To be on the safe side, so that cyclists don’t slam into doors that are opened on the narrow street,” he says.

The  administrative clerk has lived on the street for 40 years. “

The re have been a lot of pilot projects here, but this one is dangerous.”

When Bülent D. tried to get out, Freiling hit the door with her thigh and her hip and fell sideways onto the road. “A doctor across the street saw the accident and was there immediately.” Freiling did not want to have called an ambulance, but asked Bülent D. to drive her to a clinic, which he “of course” did immediately. Freiling had to be sewn on the head with four stitches. Neither of them filed a complaint. “That’s not the point either,” says Freiling, who is always on the move by bike, but rarely comes through Schloßstraße. “

The  point is that the signs, paintwork and this strange lane of distance to the parking lane are completely misleading.” She suspects that she would have understood the “dooring” security lane better if “it had not been dashed towards the road”

Bülent D. says that with the introduction of the overtaking ban for cars, “people are talking everywhere on the street”. In the middle there are long tram tracks that are only used by supply trains and empty runs. Every day, cyclists driving in the middle of the lane would be honked and jostled. “Most people are not aware of the new regulations. It doesn’t help that residents know the protection zone around the car doors. Everything is confusing.”

The  new traffic sign has been in the road traffic regulations since April 2020, and they were installed in Schloßstraße in November.

The  pictograms are also new and unknown to most road users, both suspect.

The  FDP parliamentary group in local advisory board 2 (Bockenheim, Westend, Kuhwald) also criticized this. A majority of the district parliament rejected a return to the old traffic rules. According to Stefan Lüdecke, advisor to the head of the traffic department, Klaus Oesterling (SPD), speed 30 pictograms will soon be marked on the road. In addition, by marking horizontal crosses in the safety separation strip, an attempt should be made to make it clear that it is the safety separation strip and not the area for bicycle traffic. On-site actions with the state police are also being planned. A long-term, good solution can only be expected with the renovation of Schloßstraße. In the medium term, the Frankfurt-Vordertaunus cycle expressway should run there. For this purpose, the street cross-section will be rearranged.

Freiling and Bülent D. are still shocked a week after the accident and keep in touch with each other. Both want the road “to be passable without danger to cars and cyclists. Perhaps a fixed speed camera would help more than paintwork that nobody understands”. Freiling finds clear words. “

The  way it is, it is life-threatening.” Bülent D. wants to visit Freiling in the theater as soon as performances are possible again. “She also gets a big bouquet of flowers. Maybe this is the beginning of a new friendship.”

VW defends its commitment in the Chinese province of Xinjiang |...

Angelina Jolie: New photos of Shiloh and Zahara and styling-wise they...

Board without a mask: Wimpassing: infected with Covid-19 at the meeting

Vaccinated and still isolated: “That is very devastating. What does...

National Bank – 40 billion euros loss of performance due to...