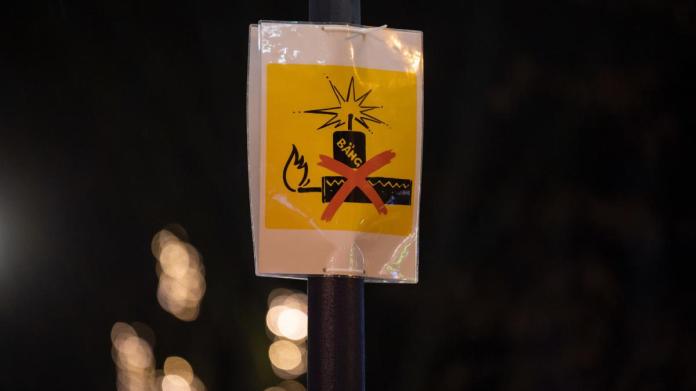 On New Year’s Eve, a tragic accident occurred in the French community of Boofzheim near the border with Germany. A fireworks mortar beheaded a man and injured another. A 24-year-old died in Brandenburg.

I In Alsace, France, a 25-year-old man died on New Year’s Eve while setting off fireworks.

The fireworks mortar “tore off the head” of the young man in the municipality of Boofzheim, announced the Bas-Rhin prefecture, near the border with Germany. A 24-year-old man was injured in the face and is in hospital.

The two men were on the street with the fireworks mortar, the police announced. Bas-Rhin prefecture banned the sale and purchase of fireworks for the entire month of December.

There were also accidents in Germany. A 24-year-old man died in an accident involving pyrotechnics in Brandenburg. According to the first findings of the police, self-made pyrotechnics were ignited shortly after midnight in Rietz-Neuendorf near Frankfurt ( Oder), as a spokesman for the situation service announced early Friday morning. It was fireworks that could not be bought. Details of the exact course of the accident were initially unclear.

The victim is said to have been with a group on an undeveloped private property. There were no other injuries, said the spokesman. A defusing team from the police also secured pyrotechnics that had not been ignited.

All in all, according to preliminary reports from the police, New Year’s Eve was exceptionally quiet throughout Germany. The restrictions due to the corona pandemic were largely complied with. The Berlin police recorded only a few violations of the corona requirements. There were demonstrations in Stuttgart on Thursday evening that the security forces disbanded for violating the Infection Protection Act. The police were on the move nationwide with massive personnel to enforce compliance with the Corona requirements.

Because of the corona pandemic, the sale of New Year’s Eve fireworks was banned nationwide this year in order to protect hospitals from overload. Firecrackers prohibition zones have been set up in many places.

Overall, the situation is “calm,” said a police spokesman in the capital early on Friday morning. After midnight, there were briefly more people on the streets. Occasionally, unauthorized pyrotechnics were ignited in the firecrackers prohibition zones. The officers also had to break up several crowds.

So far, more than 80 people have been briefly detained, among other things, for controls as part of the corona measures. Earlier in the evening, the emergency services reported that they had filed several reports, among other things because of gunfire and alcohol consumption.

The Berlin police had prepared for New Year’s Eve with a massive number of personnel. 2900 officials, 600 of them from other federal states, were on duty in the capital. The officials had their eye on the government district and the Brandenburg Gate, where hundreds of thousands of people usually gather to celebrate the New Year.

In Stuttgart there were several demonstrations in the city center. Because some participants disregarded the rules of distance and refused to wear masks, the meetings were broken up.

In cities like Erfurt and Rostock, too, the police drew a positive balance on New Year’s Eve. In Frankfurt, the police said goodbye at 4 a.m. on Twitter with the hashtag #Frankfurtbleibtstabil and wished them a “good night’s sleep”.

Duel of the CDU favorites: Merz is now the right one

Adults need at least 21 minutes of exercise a day –...

Further evidence of Corona variant in the hospital ward