Yes, where is it? Tony Romo, once quarterback for the Dallas Cowboys and now the best explainer of the often complicated sport of football, wondered where Travis Kelce was at the end of the third quarter in the semifinals between the Kansas City Chiefs and the Buffalo Bills. Ah, there he was, the chiefs’ passport recipient, he hadn’t been played in a while, and even now he looked as if he was going to block rather than run free.

Romo, whose clairvoyant skills are legendary on the field, predicted a spectacle from Kelce – and that’s exactly what happened: Chiefs playmaker Patrick Mahomes shoveled the ball from below to Kelce, who stormed into the opposing end zone. Touchdown.

Kelce was able to hide so long in the Chiefs’ 38:24 victory because Kansas City has so many weapons on the offensive that it almost seems unfair. Football is often referred to as lawn chess, and the Chiefs play as if they had two extra queens instead of two runners. This allows them to play their opponent loosely at the beginning or even to give them an advantage (the Bills led 9-0 in the first quarter) – with the certainty of being able to bring a queen into play at any time. And that the opponent has to leave one unattended in the desperate attempt to cover all the women.

It starts with quarterback Mahomes, who, thanks to his agility and understanding of the game, knows how to dodge the defensive players who are attacking and thus give other players more time to run free. To prevent this one would have to send five, maybe even six defenders forward, just as a chess player tries to restrict the opposing queen’s path; but that would make the other Chiefs weapons free, which is why the Bills, for example, usually only attacked with four defenders.

For example, there is Tyreek Hill, whose slow-motion runs look like normal people’s sprints in fast-forward. He has already run the 100 meters in less than ten seconds (9.98 as a track and field athlete at Garden City Community College), on Sunday a top speed of 33.41 kilometers per hour was measured. He hooks hooks like a squirrel and catches balls like a squirrel would grab a nut.

Against the Bills he didn’t manage a touchdown of his own, but gained 172 yards. It can be played almost anywhere, but its favorite route is Deep Crossin which he first penetrates as far as possible into the opponent’s space and then runs across the field and binds several defenders.

This means that in the half-distance Kelce is waiting, a 1.95-meter-118-kilogram force of nature with suction cups instead of fingers, always playable and responsible for 13 catches, 118 yards and two touchdowns on Sunday. So Mahomes dominates the space behind the Line of Scrimmage (where a play begins), the duo Hill / Kelce the medium and long distance.

Who should stop these chiefs? Nobody, it’s impossible, period

But it gets worse: runner Darrel Williams (52 yards on 13 attempts) has developed into a workhorse, so that Mecole Hardman can put down a 50-yard run or Clyde Edward-Helaire can create a touchdown from close range; In chess with three queens, the knights or pawns suddenly shine.

The  Bills would have needed 13 defenders instead of the 11 allowed, and even then it would have been difficult. In other words: Le’Veon Bell, two years ago the league’s most sought-after running back, never got the ball on Sunday – not because it was injured, it was simply not needed. Who should stop these chiefs?

Nobody, it’s not possible, period. You can slow it down, but not stop it, and then you just have to hope that your own offensive scores enough points to be enough.

The  Chiefs’ only defeats this season: against the Las Vegas Raiders (40 opposing points) and the Los Angeles Chargers (38).

The  Tampa Bay Buccaneers, who won the second semifinals 31:26 against the Green Bay Packers, have to score points in the Super Bowl. This February 7th final is not only interesting because the most successful quarterback in history (Tom Brady) is up against the best playmaker of today (Mahomes). He was the most valuable player in the league last season and now showed a terrific performance despite a concussion and injury to his toe. It is also interesting that after years of irrelevance, the Buccaneers suddenly have a home final (the Super Bowl takes place in Florida), as the first NFL team ever. But it should be particularly exciting because Tampa Bay is also allowed to tact with a few women – in a different way than the Chiefs, of course.

Brady is no longer infallible

Brady is the king in the middle, he serves his receivers Chris Goodwin (110 yards against Green Bay) and Mike Evans (51), his Kelce counterpart is Rob Gronkowski, mate from mutual success times with the New England Patriots, Leonard Fournette (55 Yards, a touchdown) the running workhorse. But he can also throw at Scotty Miller or Cameron Brate (one touchdown each), because, as already mentioned: In chess with three queens, the knights and pawns also shine; and Tampa Bay could afford to do without a celebrity: Antonio Brown, once Bell’s colleague at the Pittsburgh Steelers and then the league’s most sought-after passport recipient, was missing. He was injured and should be needed at the Super Bowl.

Brady is no longer infallible at the age of 43; he made three passes into the arms of his opponents against the Packers; In the end, he also benefited from the fact that Packers coach Matt LeFleur shied away from the risk two minutes before the end and did not try to get into the end zone – instead he chose the field goal safety variant, for which there are three points. LaFleur hoped his team would get the ball again, but that was a mistake, and shortly afterwards it was over. “It wasn’t my decision,” said Packers quarterback Aaron Rodgers shortly afterwards, and he left it open whether he will continue to play at Green Bay in the coming season.

In contrast to Rodgers, who despite his skills only won one final, Tom Brady (six titles) is always most successful when the stage is the biggest and people declare him fallible.

This is one of the reasons why this Super Bowl in Florida promises to be a special class spectacle – like chess with three women each, in which the steadfastness of the pawns (in football the respective offensive lines) often decides whether to win or lose.

Especially the spectators in Germany, the game starts in 14 days on Monday night at 0.30 a.m., should have a good cup of coffee before the game. If the walks of the Chiefs duo Hill / Kelce and that of the Buccaneers trio Evans / Goodwin / Gronkowski showed one thing on this semi-final Sunday, it is this: If you nod off (or in the case of Hill, blink), you are missing something and must ask: Yes, where is it? 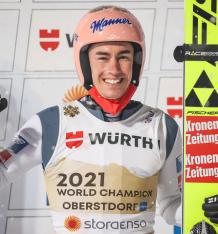 With sword and pathos: Schwarzenegger’s emotions about the storm …

This is behind the transfer hammer: Hirschi becomes a bicycle millionaire

Berlin & Brandenburg: Investigations after fire on police grounds in Biesdorf