The Danish fashion manufacturer “ Jack & Jones” advertised as a personal sponsor of Kevin Magnussen on the Haas racer. Now it is over. To say goodbye, there are still clear words to Nikita Mazepin’s address.

With the end of Kevin Magnussen’s Haas chapter in Formula 1, the lettering of his sponsor “Jack & Jones” on the Haas cars will also disappear – and that has nothing to do with the negative headlines around the Grapsch video by Nikita Mazepin, like Clarify those responsible for the Danish clothing brand on social media.

Nevertheless, there is clear criticism of the behavior of the Russian, who will chase points for the US racing team alongside Mick Schumacher in 2021. “ Jack & Jones distances itself from the behavior of the future Haas pilot Nikita Mazepin in a video that was published on social media in December,” the company clarifies in the corresponding tweet.

“It was already clear beforehand that our partnership with the Haas team would end after the 2020 season,” it continues, and that no further comments will be made on this topic. The clear words reach many Formula 1 fans who are angry about the behavior of the Russian.

In the Instagram video, which was quickly deleted, you can see Mazepin grabbing Instagram beauty Andrea d’IVAl’s chest, whereupon she lasciviously shows him the middle finger. Mazepin then apologized and Andrea also protested that it was a harmless joke.

The Formula 1 fan base reacted violently and a signature campaign was even started to prevent Mazepin’s GP debut. But the Haas team reaffirmed their intention to compete in the Formula 1 World Championship this year with Mazepin and Schumacher. Team boss Günther Steiner had previously explained that the matter would be dealt with internally and responded accordingly.

The first couple and all the others

Berlin & Brandenburg: Shots and injured in a dispute in Gesundbrunnen 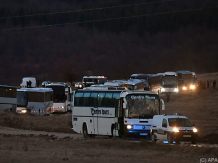