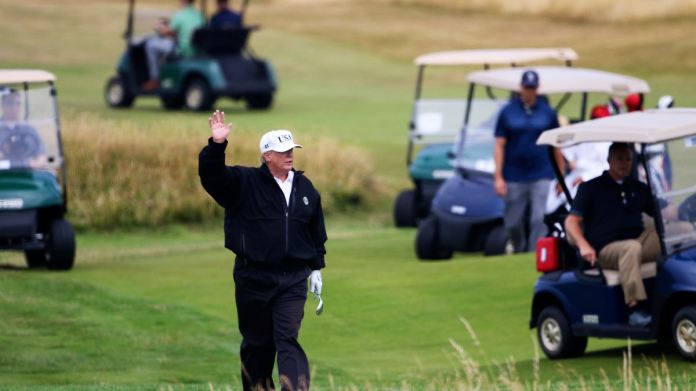 Donald Trump is a passionate golfer. The elected US President will not be allowed to watch the professionals on his course in 2022. The US Golf Association wants to prevent damage to golf. The trigger for the cancellation with clear words is the storm of Trump supporters on the Capitol.
Donald Trump’s inflammatory behavior in his final days as US president is now also affecting the 74-year-old’s favorite sport. The PGA Championship, one of the four golf majors, will not take place on Trump’s course in Bedminster / New Jersey in 2022 as originally planned. The US golf association PGA of America announced on Sunday evening. Four days earlier, angry supporters of the voted Trump stormed the Capitol in Washington.

The association’s management came to the decision in a vote to “exercise the right to terminate the agreement,” said association president Jim Richerson via Twitter. “It has become clear that playing in Bedminster would damage the PGA of America brand,” he added in a video message. In addition, “numerous programs” of the PGA and “the longevity of our mission” would be endangered.

Before the cancellation of the event planned for August 2022, the demands in sport that the leadership had to distance themselves from Trump had increased. According to media reports, there had already been debates within the association over the past two years about moving the championship. The open confrontation with a “notoriously vengeful man” was avoided for a long time, wrote the “Golfweek”.

No other sport is as close to Trump as golf, he practices it himself, and during his presidency he also made numerous trips to Bedminster. And so far, even the most controversial statements and actions of the president have had little impact within sport, at least in the US. For example, the US Women’s Open 2017 took place in Bedminster, although Trump’s misogynistic comments had already become public during the presidential election campaign and there was plenty of resistance.

However, recent developments have increasingly isolated Republican Trump. Today the Democrats want to launch a second impeachment process, although the presidency will officially end on January 20th. Then President-elect Joe Biden is sworn in.

Impeachment process: “We fight for Trump”

After violating the corona rules in cash, the meeting is now...

Despite Corona measures: CDU met with 100 people without a mask...

Trial in Frankfurt – ex-girlfriend stabbed to death in front of...