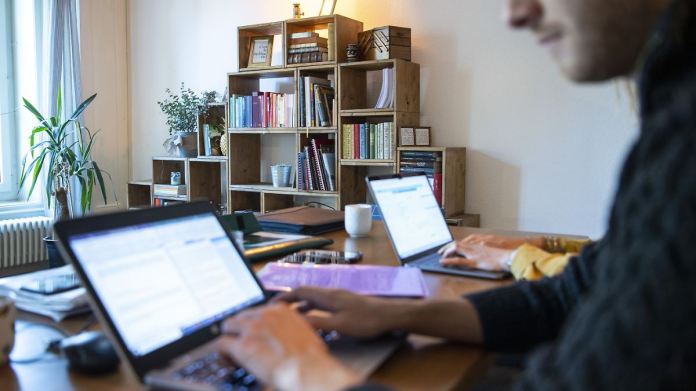 Presence instead of home office
Are companies too lax in the fight against Corona?

No big family get-togethers, no sports club, no school: The lockdown severely restricts leisure and education. Only at work does it sometimes seem like the virus doesn’t exist. Demands for stricter rules and fines for more home office are loud.
In the extended lockdown, the debate about the responsibility of the economy in the fight against the coronavirus is picking up speed. Green parliamentary group leader Katrin Göring-Eckardt calls in view of the persistently high number of infections and the occurrence of a virus mutation, to focus more on the economy when fighting the pandemic.

“Millions of employees are threatened by infections every day, because protective measures in companies are not sufficient, if there is no need to be present, or because the risks associated with traveling by public transport are not taken into account,” Göring-Eckardt told the Tagesspiegel. The federal and state governments have taken tough measures in retail, culture and schools. However, there are hardly any mandatory rules for large areas of the economy. That is incomprehensible and irresponsible.

“In the fight against the virus, the economy and the world of work are at the center,” said the politician. Most recently, Thuringia’s Prime Minister Bodo Ramelow criticized the fact that some parts of the economy could pretend nothing was happening. Employers oppose this: “We have to keep people in their bread and work as well as possible, protected from pandemics. Only with added value can we keep our social systems alive, which currently supply everyone,” said employer president Rainer Dulger of the “Frankfurter Allgemeine Sonntagszeitung” (FAS ). The country must be kept going, bankruptcies should be avoided. “You can’t close all businesses,” said Dulger.

No right to work from home

How companies deal with the home office continues to cause discussions. A draft law by Labor Minister Hubertus Heil (SPD) provides that employees should have the right to discuss a wish for regular mobile work with their employer. An originally envisaged right to work from home is no longer planned – the Union is against it. The federal and state governments have only “urgently asked” employers to create generous home office opportunities.

There is a debate on Twitter under the keyword MachtBueroszu. Users tell stories from their everyday life about being present and that they would have to take the subway to the office, despite the high number of new corona infections. The federal government must create binding regulations, said Verdi boss Frank Werneke the magazine “Stern”. The companies are obliged to ensure that infection protection is as effective as possible. In the current phase of the pandemic, this includes working from home “wherever possible”. However, the union chief warned against making workers work at home. “Many people who work on the move have to improvise a lot and may not even have enough space for a desk.”

Most of the companies in which it is even possible have switched to mobile working, said Werneke. But there is also “a certain proportion of employers who do not live up to their responsibility towards their employees.” Göring-Eckardt calls for sanctions to be used when in doubt. Where employers are unreasonable and demand presence in the workplace for no reason, “pressure must be made with fines,” she told the FAS.

The federal government has a clear responsibility and the legal possibility to issue nationwide rules. In many areas, however, home office is not even possible, such as in food retail, in nursing and in factories. The President of the German Institute for Economic Research, Marcel Fratzscher, puts the proportion of employees in Germany who cannot work from home at 60 percent.

He observed with employees who work in the office “that after a long period at home you like to come back to the company to see your colleagues again – only from a distance, but at least.” While calls for stricter guidelines for companies are getting louder, some want to actively help in the fight against the virus. “We offer our doctors and medical staff to support the public vaccination centers as early as the first vaccination phase,” says a Daimler spokeswoman. The “Automobilwoche” had previously reported on it. “We are happy to contribute our many years of experience with wide-ranging vaccinations and our existing infrastructure as quickly as possible.”

Storming the Capitol: Day of Shame for America’s Democracy

Corona symptoms: This can lead to shortness of breath – health