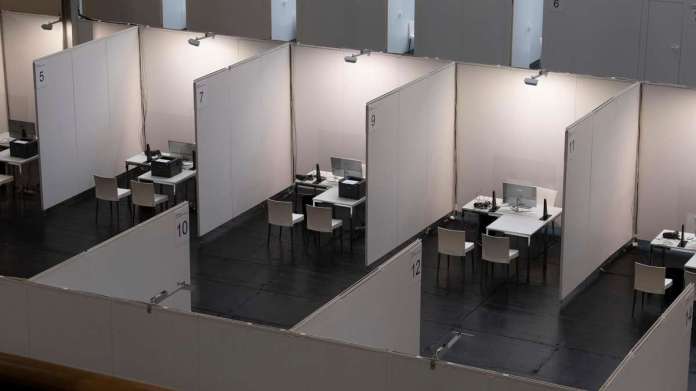 In order to get to Frankfurt for the corona vaccination, some cities in the region offer driving services for seniors.

The  city of Offenbach is not one of them.

Offenbach – Neu-Isenburg does it, Hanau or Bad Vilbel as well and also the small Florstadt:

The re is no transport service to the vaccination center,” the city said when asked by our newspaper. After the report about the difficulties in getting an appointment at a vaccination center at all, several readers answered and asked how senior citizens who were no longer fit could get to the Frankfurt Festhalle for vaccination. “What if you no longer drive a car at the age of 80 and your relatives and acquaintances don’t dare to drive around Frankfurt?” Asks reader Inge Falb-Siemon.

Corona in Offenbach: No transport service for seniors to the vaccination center

Others fear that the problems with and the costs of local public transport will keep people who want to be vaccinated from taking the trip to Frankfurt: As is well known, it is a matter of luck whether escalators or elevators work at local S-Bahn stations and especially at Frankfurt stations. An example: If you have a vaccination appointment on Tuesday at 11 a.m. and start from our newspaper, you would have to take the 101 bus to the market square, there to the S-Bahn station, then change level at the Konstablerwache, to the U. -Bahn- change and walk from the Messe station to the entrance. Almost 40 minutes are given as long as the connection works, you can cover the distance quickly and the escalators work. However, it is questionable whether people who are no longer sprightly and have not taken such journeys for a long time, dare to do it. And paying for a taxi out of pocket is likely to be overwhelming for seniors with low pensions.

In nearby Hanau, Lord Mayor Claus Kaminsky has recognized this problem and announced that he does not want to accept “that people in our city are expected to have to do without a quick vaccination because of the arduous travel route”.

The  city of Hanau has therefore provided a six-figure amount for a driver service – anyone who has an appointment for vaccination can arrange a driver service with the city. In Bad Vilbel a ride can be booked through the senior citizens’ office, in Neu-Isenburg there is an agreement for a vaccination taxi.

Driving service for the corona vaccination: No agreement between taxi companies and the city of Offenbach

The  local taxi companies had already offered the Offenbach city administration in December to find a common arrangement for a driving service. Although it was said that the offer had been received with interest, a contract did not result from it.

The  taxi companies had suggested agreeing a flat rate with the city for trips to the vaccination center and driving for the city’s account.

In its answer, the city points out that in the next few days there will be information about how to get to the Festhalle Frankfurt by public transport, as well as about parking in the Skyline Plaza car park near the entrance to the vaccination center. Otherwise, “people who are otherwise reimbursed for trips to the doctor can also inquire about them with the health insurance company”. (By Frank Sommer)

Bosnia: 1,300 refugees on the streets after camps were closed

Zoff with the Geissens continues: Now Wendler is threatened with a...

Understanding of the new normal: NRW Expert Council calls for a...

Three people died in Castrop-Rauxel as a result of Corona