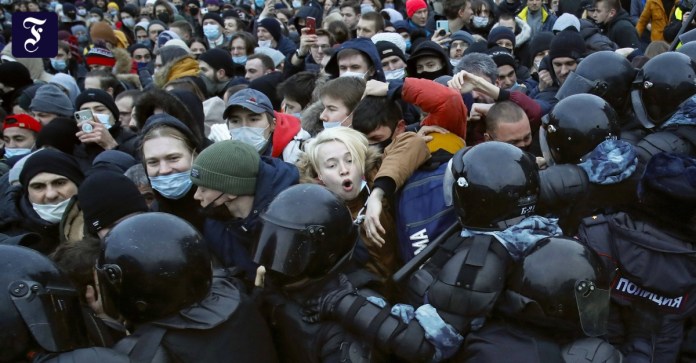 E The  day after the mass protests of supporters of the Kremlin critic Alexei Navalnyj across Russia, the Kremlin spoke of a few people on the streets. “Now many will say that many people went to the unauthorized actions,” Kremlin spokesman Dmitry Peskov told Russian state television. “No, few people went. Many people vote for Putin, ”said Peskov in the program“ Moscow.Kreml.Putin ”, which was to be broadcast on Sunday evening. Peskov also criticized the American embassy in Moscow, which had published a list of demo meeting places and times before the protests. President Vladimir Putin’s spokesman said that this was “a direct support for the violation of the law.”

The  Russian State Department had previously complained that Washington was interfering in domestic Russian affairs under the guise of concerns about the safety of American citizens abroad.

The  new American administration, in turn, condemned the “harsh methods” used by the Russian security forces in dealing with demonstrators and journalists.

According to the organizers, tens of thousands of people demonstrated in a large wave of protests in more than 100 Russian cities on Saturday for the release of opposition leader Navalnyj. In the capital Moscow alone there were said to have been 40,000 demonstrators.

The  police published significantly lower numbers. Navalnyj, who was the victim of a poison attack in August, was imprisoned for 30 days immediately after his return to Moscow a week ago.

The  44-year-old Navalnyj is said to have violated reporting requirements in an earlier criminal case while he was recovering from the attack in Germany. He faces several criminal proceedings and many years in prison in Russia.

Meanwhile, prominent Russian cultural workers, including musicians, authors and actors, expressed their solidarity with the imprisoned Kremlin opponent Alexei Navalnyj in a video.

The  writer Dmitri Gluchowski, also known in Germany, said that there are moments in life when silence is out of place.

The  musicians from Noize MC, Anacondaz and the internationally known director Vitali Manski also called in the clip “Freedom for Alexej Navalnyj!” To not watch indifferently when people are politically persecuted and imprisoned for no reason.

“You have to fight for freedom!” Said Manski.

The  more frequent and the bigger the protests, the sooner Navalny will be free again, said artist Nadeschda Tolokonnikova from the punk band Pussy Riot. She herself was in the penal camp after taking part in a protest against Kremlin chief Vladimir Putin in a church.

The  music star Andrei Makarevich from the band Maschina Wremeni was horrified in the video that an attempt was first made to kill Navalny and that he is now in prison.

The  footballer Igor Dennissow said that he wanted a better country for his children.

The  actress Irina Vilkova criticized the fact that the political system in Russia is holding on to power with a fear of the population. “We are the people who own the country.” Russia’s most popular blogger, Yuri Dud, who is followed by an audience of millions on social networks, took to the streets on Saturday. Shortly after they began, the protests in many cities in Russia were considered the largest in recent years.

Epidemiologists should learn from climate researchers

Runs “surprisingly well” for the massive world on original PS4 and...

ECB is a little less pessimistic about the economy | ...