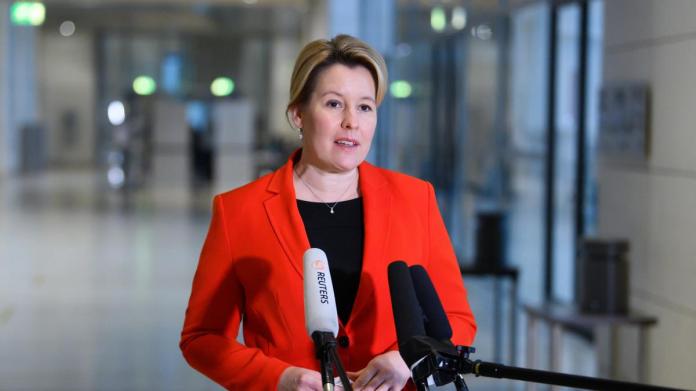 According to a decision by the federal and state governments, the schools should remain closed due to the corona pandemic. Kretschmann is still thinking about opening it soon – Family Minister Giffey disagrees.

BUnfamily Minister Franziska Giffey (SPD) has expressed skepticism about the considerations in Baden-Württemberg to open elementary schools and daycare centers soon. Giffey spoke out in Berlin on Wednesday in favor of enforcing “uniform regulations” in Germany. “We just have to be very consistent with the restrictions” of daycare and school operations. Her parents asked for their understanding for the continued school and daycare lockdown.

The  minister referred to the decision of the Bund-Länder-Round from the previous day, which had agreed on a continuation of the extensive closings of daycare centers and schools until February 14th. Giffey admitted these closings had “a big impact on families.”

“I can only appeal to everyone to hold on,” she said. “We have to use these three weeks as best we can in order to be able to open up new perspectives afterwards.”

The n childcare issues would have top priority.

New tightening of the lockdown

Baden-Württemberg’s Prime Minister Winfried Kretschmann (Greens) wants to check in the coming week whether primary schools and daycare centers can gradually reopen from the beginning of February. “If the infection situation allows,” Baden-Württemberg wants to approach a cautious opening, said Kretschmann on Tuesday evening.

Teachers’ associations predominantly welcomed the decision, while children and adolescent doctors were appalled. Chancellery Minister Helge Braun (CDU) said on Wednesday in an interview with RTL and ntv: “It was not easy for us.”

The  decision was necessary to reduce the number of new infections.

Children and youth doctors are horrified

Braun also cited the mutated virus variant that appeared in Great Britain as a reason.

The re is evidence that the mutated virus spreads in children in a similar way to adults.

According to the Association of Education and Upbringing, the closure of schools has demonstrably a high proportion of the reduction in the number of infections in the population. Udo Beckmann, chairman of the association, told the editorial network that the announced restrictive implementation must now be pushed. “

The  ministries of culture should take this seriously and act accordingly,” he said.

However, experts in pediatric medicine sharply criticized the federal-state decision. “We know for sure that a whole generation of schoolchildren will experience disadvantages for a lifetime as a result of the current resolutions,” said the Secretary General of the German Academy for Child and Adolescent Medicine, Hans-Iko Huppertz, of the “Neue Osnabrücker Zeitung” (Wednesday) .

The  current educational deficit among students will mean that they will not exhaust their possibilities in later life and will permanently achieve a significantly lower level of income than would have been possible,” said the professor. Equally important are the psychosocial and motor deficits that are currently building up.

ORF III on Thursday: Relay start for “Dinner for Two” and...

Lidar scanners come in all models, according to the report