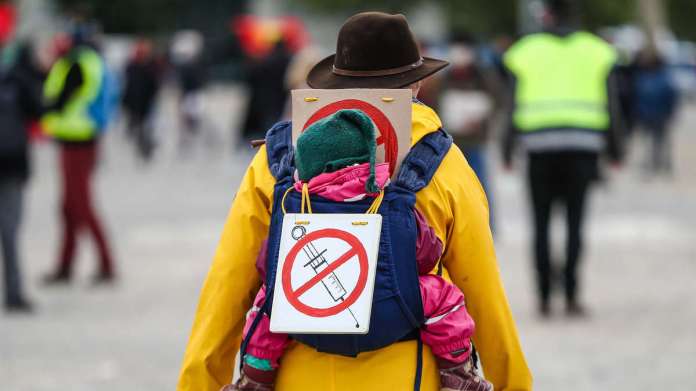 A roofer from North Rhine-Westphalia causes outrage: He threatens his employees with immediate termination if they get vaccinated against the corona virus.

Lengerich – It sounds like a really bad joke and yet, it doesn’t Uwe Mentrup  The re is no doubt about it, it’s serious: the CEO has one on Facebook Roofing in the small town of Lengerich in North Rhine-Westphalia, gave his employees the deadline termination threatened they should oppose Corona vaccinate.

Uwe Mentrup, roofer and vaccine opponent, threatens to lay off and rants about ministers

Writes a bit broken Mentrup on Facebook: “Anyone dealing with unreliable Vaccines, denounced by many experts around the world, has been injected, endangers the stability of our processes in the company! ”After a paragraph about an allegedly associated“ responsibility for all employees ”, he goes roofer once again to the full: “We reject experiments with the performance of our company in favor of the pharmaceutical industry!”

Roofer threatens his employees with immediate termination in the event of a vaccination. That would be ineffective, but the announcement still works. pic.twitter.com/N7jjDwfcdy

About the fact that he could seriously endanger the health of his workforce with such a blackmail attitude Mentrup know nothing: “If you don’t understand that, you have to look for work elsewhere.”

The  post quickly went viral on Facebook and earned the almost expected reactions; while him conspirators and Vaccination opponents cheered, many users expressed their sheer horror.

Vaccination opponent Mentrup deletes his post and publishes a new one

Shortly afterwards the Facebook post disappeared, Mentrup had obviously deleted it. But not because of the fact that he has neither the right nor the possibility to trace who of his employees is against Corona hat vaccinate to let. Or from the fact that such an instantaneous termination would not have stood before any labor court in this country. And not because of his irresponsible behavior, which many comments had pointed out to him. On the contrary, the roofer immediately published a second article.

And this post gives an insight into Uwe Mentrups actual motivation. He states that he has the “best employees an employer could wish for” and adds: “I don’t have any of them vaccinated [sic] prohibited (which would not be necessary for everyone) or prescribed. ”He claims that“ old and defenseless people sometimes have no specialist information vaccinated“And that” ministers simply decide on professions, themselves vaccinate to leave or lose their job. “

Roofer Uwe Mentrup rows back: Vaccination opponents do not mean it at all with the termination

He never intended to give his workforce one Corona–vaccination to forbid, in addition, “this action” was “discussed with his employees and the purpose of this post [sic] explained “.

The  explains what the purpose is roofer not directly, but adds: “None of the haters [sic] here has never been one of the planned Forced vaccinations Critically expressed by the nursing staff, which I find really very questionable! “He continues:” But if nobody dares to be [sic] Open your mouth, then I’ll do it for you! ”

Nööö, I would get vaccinated & then, if he was dismissed, take him to the labor court!

The re the termination would be ineffective. If I quit the guy myself without a new job, I get a ban from the office.

The  comments below his post are partly sarcastic, partly clear. One commenter writes: “Just show how irresponsible you are and as an employee you really have to consider whether you shouldn’t be looking for a new job.” Another Facebook user says: “Once again it becomes clear: Germany has a real educational problem! ”

Caregiver condemns the threat of dismissal from vaccination opponent Mentrup

Another comment draws attention to the danger of such a blackmail attitude: “Nobody has the right to spread such nonsense and lies just because Harald allegedly posted a critical video of you on YouTube vaccine Sent experts.

The  people in the nursing homes die away from the carers and they do not want each other – without any reasonable justification vaccinate to let.”

Yeah yeah This is always particularly believable when the shit is flying towards you.

“One of the employees of a nursing ward expresses himself clearly and distinctly:” Greetings from nursing – hospital – CoVid ward. I am happy that I got the first dose of a vaccine last week, which is one of the largest Vaccination studies the world and has been declared safe and ready for use by hundreds of experts worldwide. But what do these people know in comparison to a timber builder. I hope this vaccine ends the pandemic and brings us back to normal life – and I hope that you opened the eyes of some customers with your post yesterday. No matter how you twist and turn it today: you should be ashamed. “

However, while the vast majority of comments were negative for the roofer fails, he also receives approval. An obvious one Vaccination opponent writes: “Finally an employer who questions and tries to wake up the rest of the sleeping sheep and Merkel pendants. [sic]”Another thanks you:” Thank you very much for your courage and honesty. “

A user tries his hand at a balance sheet: “5% applause, 95% rejection, bad advertising and damage to the business for a rash threat of illegal things Terminations. It was probably not worth it. ”Uwe Mentrup himself has now reacted again and invited to a press conference. A press conference one Rooferwho is about Vaccines speaks. On his private Facebook page he shared a slogan image: “

The  greater the roof damage, the better the view of the stars.” (Mirko Schmid)

Graphics show the course of the pandemic in Dorsten

“One year after an infection, you have to be very careful”

Corona: DIY stores open? Such is the situation in your state

Only six self-tests in one branch: At Aldi in Berlin, the corona tests were gone in minutes – Berlin

Children and Covid Mutations – We asked

+++ Coronavirus update +++ – Corona: Switzerland recorded an immortality in February despite Covid – Coronavirus free tests for everyone from mid-March – Berset...

WhatsApp still requires compulsory consent: Do I have to delete the...

Warning words from Dynamo board of directors: “Financial situation is serious”

Democrats secure control in the Senate