Berlin (dpa / bb) – Berlin’s CDU chairman Kai Wegner calls for the re-introduction of preschool. Their abolition by the coalition of the SPD and the Left Party in 2005 was a serious mistake. “ We want to correct that and reintroduce preschool in elementary schools,” Wegner told the German press agency. “The continuous, age-appropriate content-related” work “over three hours, as it was done in the earlier preliminary classes, has proven itself excellently in preparing the children for everyday teaching,” said the CDU politician. For example, it strengthens concentration, independence and expressiveness.

“The preschool must be compulsory for everyone,” said Wegner. Every elementary school should check the introduction of preliminary classes with a framework learning plan that is implemented by specially trained staff. “ In those places where the preschool cannot be accommodated in the elementary school, preschool groups for children in the last daycare year should be formed in the daycare centers.” According to the ideas of the CDU, these groups should work according to a framework curriculum and be instructed by staff with special additional training, in close cooperation with the surrounding primary schools.

The preschool should give children the ability to go to school. “ For children who need more time to learn this skill, we are putting back school enrollment one year,” suggested the CDU boss. “ This way the children can get used to school while playing. I want every child to be able to start school successfully.”

The preschool has an excellent preparatory effect, said Wegner. “ We want to implement the best possible education system for all Berlin schoolchildren. To do this, we have to be ready to spend money – for smaller class sizes, for additional school places, rooms and well-trained staff.”

Strange bug: Anyone who wrote this word on Twitter was banned...

Frankfurt: Trouble in the SPD local advisory board over billboard

Retail – Berlin – rush to shops in Berlin on Advent...

These are the strongest vacuum cleaner brands in Germany 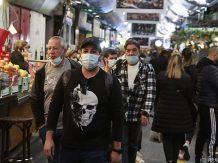 Trump opens the way for new methods of execution in USA