Stuttgart (AP) – Baden-Württemberg’s FDP parliamentary group leader Hans-Ulrich Rülke considers it harmless for the liberals if the CDU should elect the more economically liberal Friedrich Merz as party leader. “I think that would be a relatively cheap option for us,” said the FDP presidium member of the dpa news agency in Stuttgart. “ Merz has something of a blunder search engine.” The CDU politician hardly survives an interview without ambiguous statements that then fell on his feet. “ If you then do that in the role of a candidate for chancellor, I can imagine how quickly the polls drop sharply.”

The CDU elects a new chairman on January 16. In addition to Merz, the North Rhine-Westphalian Prime Minister Armin Laschet and the foreign expert Norbert Röttgen will be taking part. Rülke, who leads the south-west FDP as the top candidate in the state elections on March 14, compared Merz with the former SPD candidate for chancellor Martin Schulz. Merz will “need approximately half as long as Martin Schulz to light the house”. Schulz first gave the SPD a high poll in the 2017 federal election campaign, but then the comrades sagged sharply and achieved a historically poor result.

From Rülke’s point of view, the advantage of a Merz candidate for chancellor could be that with a weakened Union, a Jamaica coalition would come into play again. “ It could also be that the Greens remain so strong and Friedrich Merz becomes the Union’s candidate for chancellor, then you need the FDP again.” A Jamaica coalition is currently out of the question because, according to surveys, the CDU / CSU and the Greens together have a solid majority.

“60 percent of our intensive care patients have …

Europe is building its virus fortress 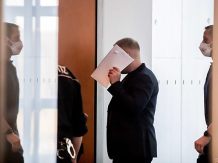 Corona mutation from England has been rampant in Germany since November