Another well-known politician who has come under pressure because of allegedly unclean scientific work.

The Austrian Family and Labor Minister Christine Aschbacher (ÖVP) resigns on allegations of plagiarism. She justified her move on Saturday with a prejudice by “the media and political comrades”. Previously, accusations had been raised that Aschbacher had copied parts of her scientific work without properly identifying the sources.

The 37-year-old strictly rejected the allegations of the expert Stefan Weber, known as the “plagiarism hunter”. According to Aschbacher, she always wrote her work – it was about a diploma thesis and a dissertation – to the best of her knowledge and belief and trusted the assessment by recognized professors. She is resigning to protect her family from hostility and abuse.

The politician submitted her dissertation to the Technical University of Bratislava in Slovakia last May. She wrote her diploma thesis in 2006 at a university of applied sciences in Vienna. Weber also accused the minister of “gibberish” and lack of knowledge of German in his blog in a sharp tone.

Austria’s Chancellor Sebastian Kurz thanked Aschbacher in the short message service Twitter for her services as Minister of Labor in the Corona crisis. Who follows her in office should be announced on Monday.

Pfizer / Biontech – Vaccine deliveries will soon be back on... 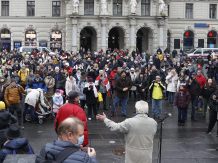 How it continues after the bridge at Breitenbachplatz is demolished