“Every great player in the world is welcome at PSG at any time,” said Thomas Tuchel’s successor when asked about the Champions League finalist’s interest in signing the former world footballer from Spanish top club FC Barcelona.

PSG are one of the few serious alternatives for the striker with Messi’s end-of-season contract at Barca. Since the beginning of the year, interested parties can officially talk to the 33-year-old about the possibilities of a transfer.

Messi’s ex-club colleague Neymar, who is now playing in Paris, expressed his wish for a sporting reunion with his former strike partner last December. After that, the first rumors of PSG’s efforts to secure Messi’s signing began to boil.

Before his debut on the PSG bank on Wednesday in the league game at AS St. Etienne, however, Pochettino basically downplayed the current importance of future planning with reference to his just getting used to it. “We try to get used to each other in conferences and training. To be honest, we’re not talking about the Messi speculation. We’re preparing for the game in St. Etienne, that’s the main goal, ”said the 48-year-old at his first press conference as Tuchel’s successor.
In addition to the Argentine passport, the two South Americans also have a connection to the traditional Argentine club Newell’s Old Boys: Pochettino’s career as a coach began at Messi’s childhood club.

“To All the Boys: Always and Forever”: So anders war die...

Berlin & Brandenburg: 21-year-old pedestrian hit by a car and fatally...

Coronavirus: So many people have already been vaccinated in your state

Strange appointment rule: So you can shop at H&M, Zara and... 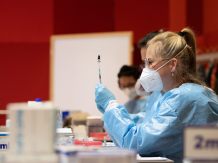 Corona vaccination in Lower Austria: Dates for people aged 72 and...